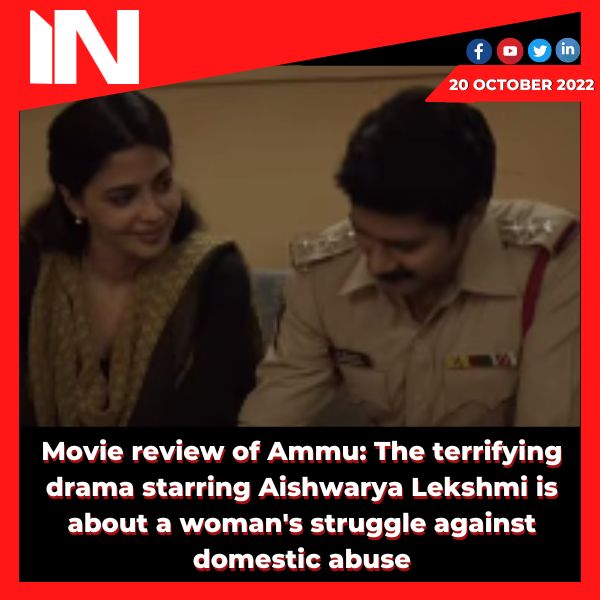 Contrary to many of her colleagues, Aishwarya Lekshmi has a persistent need to choose scripts that matter. She is definitely emerging as a force to be reckoned with thanks to it. She opted to feature in Ammu, a tense thriller directed by newcomer Charukesh Sekar, after financing Sai Pallavi’s Gargi, unquestionably one of the best movies of the year. Ammu is about a domestic violence survivor who stands up for herself. Aishwarya’s Ammu, which is modelled after movies like Thappad and 47 Naatkal, is a very well-known story of domestic violence of a weak wife, but happily it takes a really fascinating detour to provide a novel conclusion.

Playing Ammu is Aishwarya Lekshmi. The dialogue between a young girl and Ammu, who is getting ready to wed her police officer neighbour Ravi (Naveen Chandra), opens the movie. The young girl questions Ammu about her feelings for Ravi and her readiness for marriage. Ammu responds by saying she believes she is familiar with him and then inquires as to her motives for posing the query.

The character of Ravi is expertly introduced in one of the best scenes of the film, and it doesn’t take long for the audience to discover his actual motivations. As soon as Ammu discovers of Ravi’s aggressive and domineering conduct, her entire life begins to fall apart. The rest of the narrative focuses on Ammu’s response to domestic abuse and if she is successful in making her husband learn a lesson.

Ammu will undoubtedly rank among this year’s most significant movies. With the manner it decides to end the film, it takes a very pertinent issue that has been a subject of conversation for a while and gives it a very interesting spin. Even if one were to imagine such a tale and write down every scenario that might occur, the conclusion of this movie would still catch you off guard. Ammu explores important topics that must be considered when it comes to a woman’s engagement in a marriage, rather than acting out like an awareness video on domestic abuse. Ammu sobs to her mother in one of the most important scenes of the movie and berates her for getting married so young. The mother jokingly replies, ‘you’re already 25’. In the subsequent scene, when Ammu opens up to her mother about Ravi turning abusive, she quotes the examples of her father and defends it by saying men have no other means to take out their anger and stress.

The video skillfully examines how women have been socialised to domestic violence through decades and how the majority of them have come to accept it as a way of life. There is also a lovely scene regarding a woman’s right to an abortion, which couldn’t have occurred at a better time than right now as the Supreme Court of India upheld that right.

Aishwarya is pretty gutsy to be the star of such a project at a time when she can get away with portraying the stereotypical heroine. It appears as though she intends to use her films to express a point. Aishwarya is therefore choosing projects deliberately that go beyond the conventional notion of entertainment. Aishwarya excels in her role as the weak wife trying to collect the courage to leave her terrible marriage. One of her better performances is this one. Naveen Chandra had the guts to perform this part, and he does a great job of portraying the frightening spouse. In a significant cameo, Bobby Simhaa excels. Streaming of Ammu on Prime Video started on October 19.

“Babu” Sooraj Barjatya is referred to by Salman Khan as his “best director”: One of the kindest people I have ever encountered.