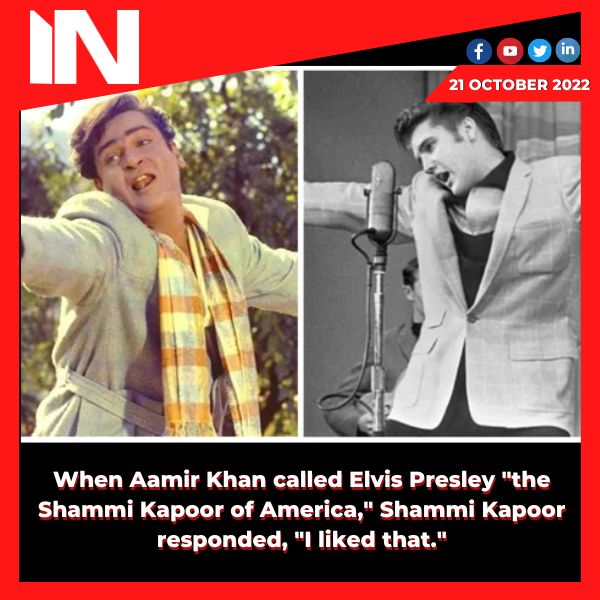 Shammi Kapoor struggled to escape comparisons to the late music king Elvis Presley ever after he adopted the persona of the “Rebel hero” in 1957’s Tumsa Nahi Dekha. The actor’s dancing, mannerisms, and even hairstyle were frequently compared to those of the American popstar. Aamir Khan, however, previously argued that Elvis should be referred to as America’s Shammi Kapoor. On October 21, the 91st anniversary of Shammi’s birth, a look back at the conversation in which the seasoned actor brought up the analogy.

Shammi Raj Kapoor, who was born Shamsher Raj Kapoor to actor Prithvi Raj Kapoor, made his film debut in 1953’s Jeevan Jyoti, following in the footsteps of his father and older brother Raj Kapoor. His first few movies all bombed at the box office, and it wasn’t until Tumsa Nahi Dekha and Dil Deke Dekho that he started to develop a reputation as a playboy and dancer. Many referred to him as Elvis Presley of India. Around the same period, the pop star also became famous.

It’s incorrect to argue that Shammi Kapoor is the Elvis Presley of India, the actor Aamir Khan said in 2008 while praising Shammi. Elvis, in my opinion, is America’s Shammi Kapoor. Later, in a conversation with Filmfare, Shammi responded to Aamir’s remark by saying, “I appreciated that. Each person has a distinct style. One sees a lot of artworks; they inspire one because they enjoy certain colours. It doesn’t necessarily imply that you took them. I don’t aspire to be regarded as a great artist. I’ve never performed the Devdas in my life. However, I do think I could represent the music I was given well. I’m pleased with that.

Throughout the 1960s, Shammi Kapoor went on to star in blockbusters like Junglee, Kashmir Ki Kali, Teesri Manzil, and Prince. In 1971, he switched to supporting parts after Andaz. He appeared in more than a hundred movies during the second phase of his career, including Vidhaata, Betaab, Henna, and Yeh Hai Jalwa. Chronic kidney failure caused his death in 2011. Later that year, Rockstar, his final film, was released.

Kangana Ranaut, a talented actress, is receiving full praises for her movie, Kantara.