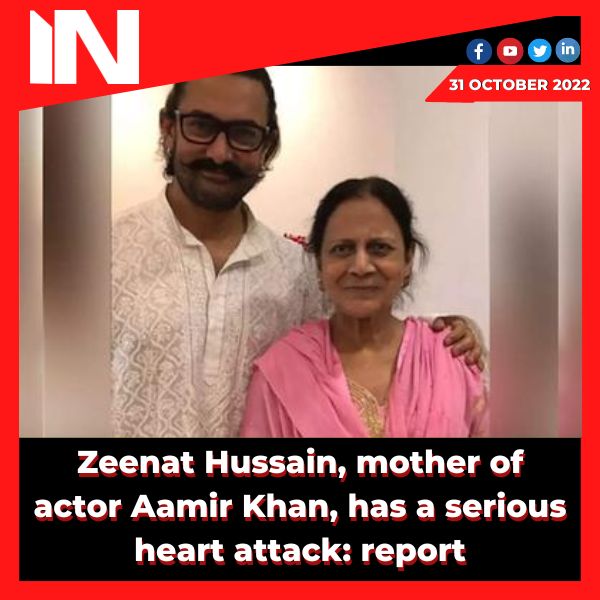 Zeenat Hussain, mother of Bollywood actor Aamir Khan, reportedly had a severe heart attack. According to sources, Aamir was present when his mother had a severe heart attack as they were celebrating Diwali at their Panchagani home. The actor has been by his mother’s side ever since she arrived at Mumbai’s Breach Candy hospital after being transported there. According to reports, she has received visits from the rest of the family.

According to a source cited by ETimes, Aamir’s mother is currently getting better at the Breach Candy hospital. Her vital signs are steady, and she has been responding nicely to treatment, the source continued. Neither the actor nor his family have yet to confirm this publicly or in any other way.

On June 13 of this year, Aamir and his large family got together to celebrate his mother’s birthday. At the celebration were the actor’s ex-wife, director-producer Kiran Rao, and their son Azad Rao Khan.

In a viral online video, Kiran and Aamir are seated close to each other, while Azad is seen sitting next to his grandma as she cuts the birthday cake. Zeenat Hussain was assisted by Aamir, Kiran, and Azad in blowing out the candles.

Aamir admitted that one of his biggest regrets was not spending enough time with his family during an appearance on the most recent season of Karan Johar’s talk show Koffee With Karan. In order to emphasise the value of his family and relationships in his life, he had indicated that he now makes an extra effort to spend time with his mother and children.

Aamir Khan’s father Tahir Hussain is a Film producer . Other members of his family, including his late paternal uncle, producer-director Nasir Hussain, have worked in the Hindi cinema industry. Aamir is the oldest of four children. He has two sisters, Farhat and Nikhat Khan, and a brother, Faisal Khan.

Coldplay and BTS’s Jin Perform “The Astronaut” Live for the First Time at a Concert in Buenos Aires.