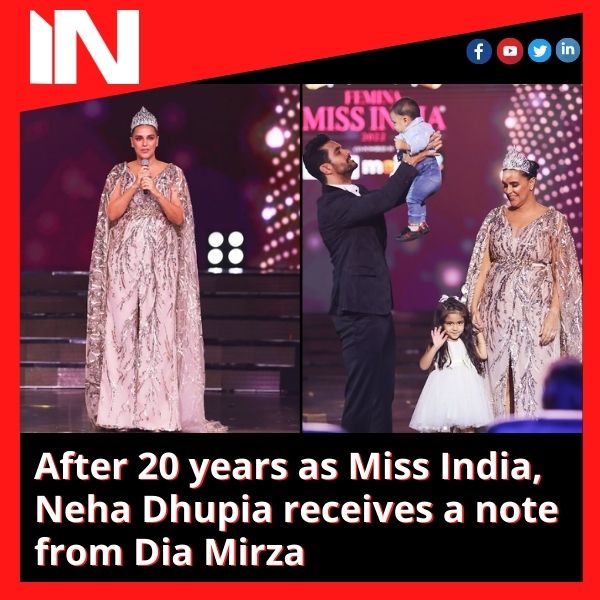 Neha Dhupia, a fellow actor and past beauty pageant winner, is the subject of a letter of praise from Dia Mirza. While Neha won Femina Miss India in 2002 and placed among the top 10 finalists at the Miss Universe pageant, Dia had won the Miss Asia Pacific International title in 2000. Dia and Neha are both actors today, married, and parents.

Dia posted a photo of Neha at the Miss India ceremony in Mumbai on Sunday along with a message on her Instagram Stories. Celebrating 20 years of this fierce, genuine, powerful, and gorgeous woman, she wrote.

Neha was one of the judges at the Sunday Miss India pageant. As she celebrated 20 years of winning the Miss India title, she was honoured on stage by her parents, Pradip Singh Dhupia and Manpider Dhupia. Later, Mehr and Guriq Bedi, together with her actor husband Angad Bedi, joined her on stage.

Neha attended the event alongside the jury members Malaika Arora, Dino Morea, cricket player Mithali Raj, and others. She carried the crown on stage as well as the red carpet in a powder blue gown with cape sleeves.

Neha made her Bollywood debut with the 2003 movie Qayamat: City Under Threat, which came out soon after she won the pageant.

She has appeared in other movies since then, including Julie, Shootout at Lokhandwala, Chup Chup Ke, De Dana Dan, Tumhari Sulu, Lust Stories, and Helicopter Eela. She last appeared in the movie A Thursday, where Yami Gautam played a kidnapper, as a police officer.

In 2018, Neha and actor Angad Bedi were married. Mehr Dhupia Bedi, who is three years old, and Guriq, who is nine months old, are the couple’s children.

Neha explained how she handles everything to Hindustan Times in February of this year, saying, “We don’t argue over who gets to watch the kids since we were never the type of people who were very regimented about our lives.

We do not argue, but it is very difficult to manage when you have two children and occupations where there is no set timetable. Despite our efforts, we do not always succeed. Of course, we can’t change a movie’s release date, but we may request that an advertisement shoot take place on Monday rather than Sunday.

Advertisement
Related Topics:DiamirzaIndiaMissnehadhupianotereceives
Up Next