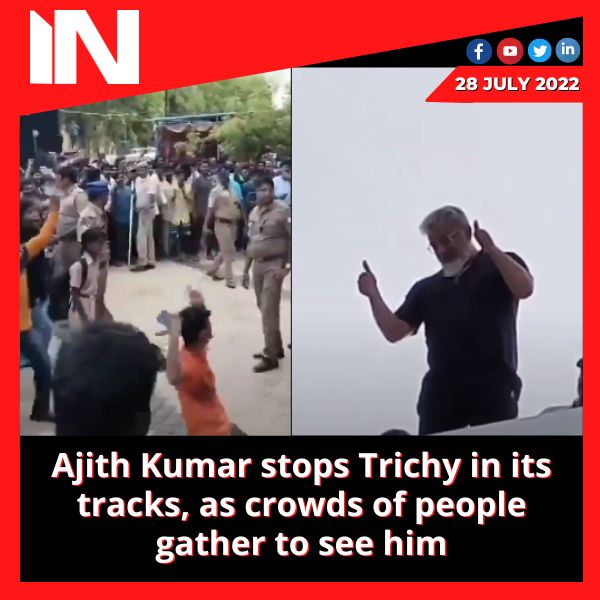 Actor Ajith Kumar, who was in Trichy on Wednesday to compete in the 47th Tamil Nadu rifle shooting championship, caused the city to come to a virtual stop as hordes of his fans congregated outside the stadium to see him. Ajith was unable to leave the location to make it to the airport in time for his trip back to Chennai, so the neighbourhood police were called in to control the gathering.

Ajith arrived in Trichy on Wednesday for the final leg of the competition after finishing the preliminary rounds in Coimbatore. Social media has seen the appearance of images and videos from the location. At the Tamil Nadu State Shooting Championship the previous year, Ajith had earned six medals.

Ajith can be seen in one of the videos greeting his supporters and waving to them while standing outside the venue. The audible cheer of the throng gathering outside can be clearly heard in the video. In a different video, a female police officer is seen giving instructions to the audience that has gathered to meet Ajith and requesting that they act appropriately when the actor comes outside. She is heard telling them to let him leave quietly because he needs to get to the airport.

Ajith is hard at work filming his future project, which is now known as AK 61. He has now worked with producer Boney Kapoor and director H Vinoth on three projects in a row. Manju Warrier, who would play Ajith’s opposite in the movie, has recently been signed, according to Boney. Fans were curious as to whether Ajith was portraying a villain when Boney shared a still from their upcoming film on Twitter.

Boney made his debut in the Tamil film industry with the Pink remake Nerkonda Paarvai, in which Ajith performed the part that had previously been played by actor Amitabh Bachchan in the Taapsee Pannu-starring film. Prep mode on the AK61 (sic), he remarked on Twitter.

Advertisement
Related Topics:ajithkumarcrowdsgatherpeopleseestoptrackstrichy
Up Next

Prabhas has agreed to work with Kiccha Sudeep, but only under one condition: “He is a very sweet guy, but…

Sai Pallavi states that she hopes to play in films like Padmaavat and Bajirao Mastani.