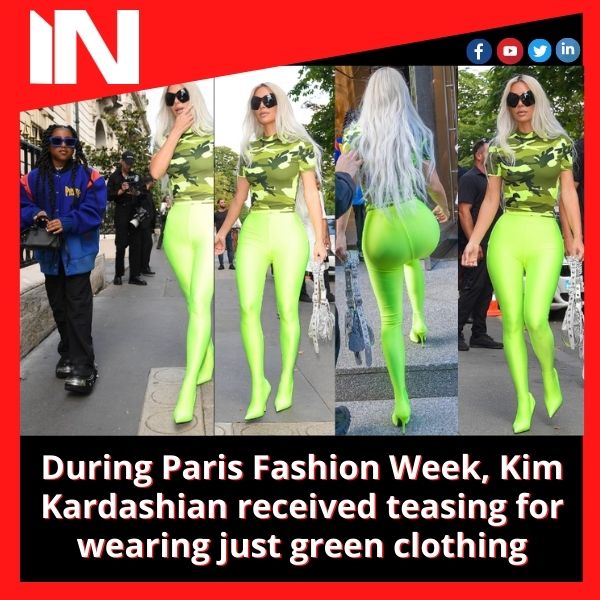 One of the most well-known celebrities in the world, American reality TV star Kim Kardashian is known for a variety of things, including her bold yet beautiful sense of style. The same is demonstrated by her illustrious sartorial evolution over time. However, it rarely shields the celebrity from online criticism or trolls, and Kim is well known for stirring up controversy. The celebrity was recently mocked for her day-out attire while in Paris for Couture Fashion Week. Kim was criticised for her all-green dress when she went out in Paris with her and Kanye West’s daughter, North West.

Kim and North West travelled to Paris on Tuesday to see the offices of Jean-Paul Gaultier and the Balenciaga store. The mother and daughter, who are in Paris for Couture Fashion Week, dressed spectacularly. While North donned an outfit from her dad’s old streetwear line, Pastelle, Kim opted for a neon green Balenciaga combination that included a camouflage top, neon green pantashoes (Pant+shoes), and enormous sunglasses. View the images of them below.

Kim’s admirers on social media criticised her heavily for the attire she chose for the daytime outing. Internet users believed that the pantashoes, a design made popular by Kim after she began donning several Balenciaga outfits last year, were getting boring. Many also noted that since she and Kanye West split up, Kim’s fashion choices have become very basic. A few individuals also remarked on how blonde she appeared. Read the remarks that follow.

“North dresses better than her mom and she fashions herself,” a social media user said. “I’m not going to lie every since you and Mr. West ain’t been a thing your dressing as went utterly terrible,” said another. Kim has no style…It was always Kanye, a netizen remarked. Ye isn’t styling her anymore, and that much is clear, a Twitter user stated.

While they were dating, Kanye West was credited with styling a number of Kim Kardashian’s looks. Even the classic Met Gala 2021 look, which included an all-black Balenciaga ensemble from head to toe paired with a ponytail and heels, had a Kanye connection.

Kanye West allegedly urged Kim to don the daring and eccentric Balenciaga ensemble, according to TMZ. According to several accounts, Kanye gave Kim the confidence to use her talents and the public’s imagination to push the boundaries.

Ranbir Kapoor and Vaani Kapoor, actors of the movie Shamshera, are pictured as the hottest couple