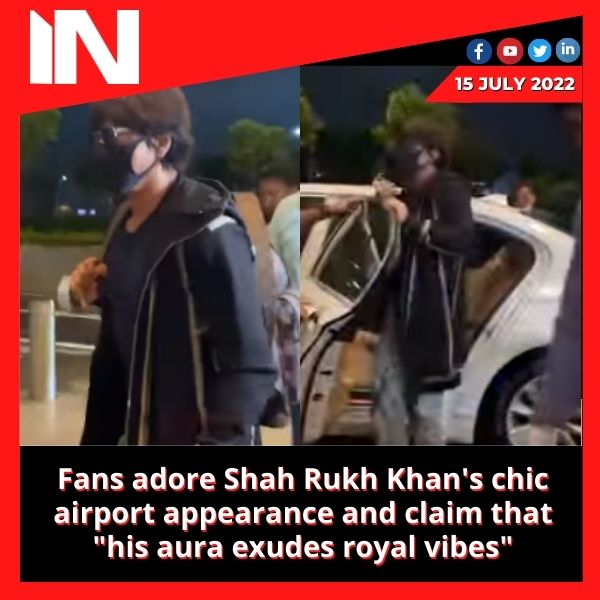 Shah Rukh Khan was seen leaving the city for a job assignment late on Thursday and was photographed at the Mumbai airport. A mask, sunglasses, and hair that hung down on his forehead concealed his face. The actor has three movies scheduled to come out in 2019: Pathaan, Jawan, and Dunki.

On Instagram, a paparazzi account posted a video of Shah Rukh arriving at the airport. He was observed wearing a black t-shirt, blue jeans, a black jacket, and eye-catching silver and white sneakers. On his shoulder, he slung a backpack as well.

The actor’s admirers were overjoyed to see him. King Khan is coming to London, a fan speculated, perhaps alluding to the fact that several Bollywood celebs have recently taken flights to London for vacations. Another person responded to Shah Rukh’s expression by writing “Ohohohoho” and a heart-eye emoji. “His aura has king vibes,” a fan added.

Last week, Shah Rukh made his most recent appearance on Eid. From the balcony of his Mumbai residence, Mannat, he met hundreds of followers. The actor was accompanied by his nine-year-old son, AbRam Khan, who was seen waving to admirers.

After an absence of about two and a half years, Shah Rukh is getting ready to return to the big screen. Alongside actor John Abraham and co-star Deepika Padukone from Chennai Express, he will appear in Siddharth Anand’s Pathaan. Then he has Rajkumar Hirani’s Dunki with Taapsee Pannu and Atlee’s Jawan with Nayanthara.

On June 25, the actor reached 30 years in Bollywood. He commemorated the event by revealing the Pathaan motion poster, which showed him sporting a gruff appearance and a rifle. The Hindi, Tamil, and Telugu versions of Pathaan will be released on January 25, 2023, with support from Yash Raj Films.

His wife Gauri Khan and Red Chillies Entertainment are the producers of Jawan. Shah Rukh was bruised and bandaged in the movie’s teaser, intending to get revenge on his adversaries. It will be available on June 2 of the next year.