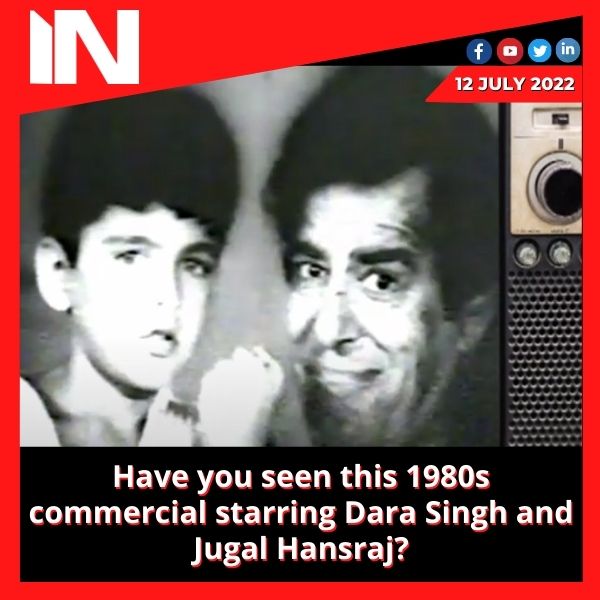 Dara Singh, a wrestler, actor, and politician, passed away on July 12, 2012. Let’s remember the time he appeared in an Amul commercial alongside actor Jugal Hansraj back in the 1980s as we mark the tenth anniversary of his passing. Dara gained notoriety for his portrayal of Hanuman in the television series Ramayan in the 1980s.

In a 1980s television commercial, a young boy (Jugal Hansraj) is heard saying, “I want to be strong like Dara Singh,” as the Mahabharat actor pulls him into his arms.

On the tenth anniversary of his passing, Dara’s son Vindu Dara Singh posted a photo of his father. “Miss you dad it’s been 10 years but your blessings are still with us all,” he captioned it.

In response to his tweet, one follower referred to Dara as “one of the legends.” Another person wrote, “Jai Bajrang Bali,” in reference to the Mahabharat role (Hanuman) he played.

Dara Singh began his wrestling career in his late 40s and faced off against wrestlers Bill Verna, Firpo Zbyszko, John Da Silva, Rikidzan, Danny Lynch, King Kong, Ski Hi Lee, and numerous others. He defeated Lou Thesz to win the World Championship in 1968 after winning the Commonwealth Championship in 1959. He declared his wrestling retirement in 1983.

Later, he made more than 140 film appearances, including those in the following movies: Mera Desh Mera Dharam, Bhagat Dhanna Jatt, Sawa Lakh Se Ek Ladaun, Anand, Mera Naam Joker, Daada, Rustom-E-Baghdad, Sher Dil, Sikandar E Azam, Raaka, Jab We Met, and many more. He was cast as Hanuman in the Mahabharat in the 1980s. Additionally, he portrayed Bhima, Balram, and Shiva in a number of legendary movies. He joined the Bharatiya Janata Party in 1998, making him the first athlete to be nominated for the Rajya Sabha..

Ranveer Singh and Deepika Padukone post photos from his birthday celebrations in the US.