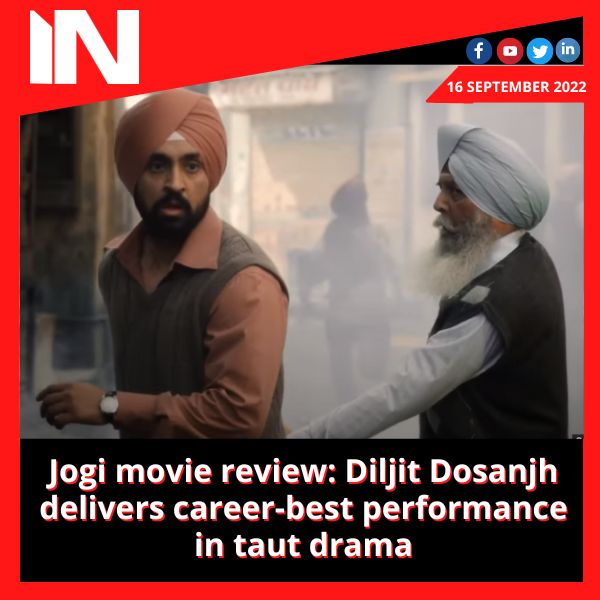 Jogi needs to dispel any lingering questions about Diljit Dosanjh’s acting abilities. The actor-singer gives one of the best leading performances by a Bollywood actor in recent memory, displaying a vulnerability infrequently seen in mainstream Hindi film. He is skillfully supported by a potent supporting cast and compassionate direction from Ali Abbas Zafar. Even though it occasionally goes a little too far, it’s a well-made movie about a delicate subject that makes you stop and reflect.

In the three days following the assassination of Prime Minister Indira Gandhi on October 31, 1984, which sparked a wave of anti-Sikh violence in the city, is shown in the movie Jogi, which is set in Delhi’s Trilokpuri neighbourhood. The main character of the movie, played by Diljit, ensures that more than 100 members of his village depart Delhi even as a vengeful local councilman and dishonest police officers plot to kill them for political gain.

The majority of the Indian films on the 1984 violence were in Punjabi. But there haven’t been many depictions of the atrocities of that year in popular Hindi movies. Jogi makes the daring decision to place the story in the national capital in an effort to fix it and make it more impactful. The movie does not squander time on tedious character backstories or exposition. The first ten minutes alone are when the “action,” if I may use that impolite term, starts. Amidst images of neighbourhoods and DTC buses on fire, the truly terrible face of a riot is shown. This is the one scene in the movie that errs on the side of excess. However, I can see why it’s necessary.

Diljit stands out in the midst of all this mayhem. Any talented actor would be pleased of the elegance and finesse with which he conveys the helplessness and vulnerability of his role. Up till some big performers enter to share his burden, Diljit effortlessly carries this section of the movie. In one incident, which is also depicted in the teaser, some individuals assault Jogi and his father inside a bus. “Hamari kya galti hai” (what is our fault), yells a helpless Jogi. You feel physically pinched by Diljit’s delivery of that line.

Once more, Mohammed Zeeshan Ayyub feels at ease in his role as the idealistic police officer who must safeguard the safety of his friend Jogi and his family despite the fact that his superiors wish to gain political favour by calling for a slaughter. However, Kumud Mishra steals the show with his brilliant performance as the town councillor who planned this atrocity. The performer portrays the villain’s actual human motivations, giving him a likeable but nonetheless abhorrently evil persona. Hiten Tejwani also springs a surprise with a cop with a grudge against Jogi, who is a truly surprising grey character. In this group of outstanding performances, he stands out.

The main accomplishment of Jogi is the portrayal of all characters as flawed and broken but nonetheless human beings. There are no bad demons or knights in gleaming armour. Even the bad guys are political opportunists rather than religious fanatics, portraying a reality that has occurred much too frequently in contemporary India. Although there have been great films of intergroup conflict, very few are as complex and authentic as Jogi.

Even if there are occasions when the movie resorts to exploiting some cliches, the action and thrill are never-ending. However, the movie never drags, never loses steam, and never crosses the line into becoming unwatchable.

It is kept tense by its brief running time. It does start to repeat itself and the plot does tend to meander before a quick resolution that does come across as an anti-climax out of nowhere, which makes it a little monotonous in the second half.

Given its realism and daring portrayal of government cooperation in violence against a community, the movie may not be to everyone’s taste, but it is nevertheless vital to watch and advances Hindi cinema. On September 16, Netflix will debut Jogi.