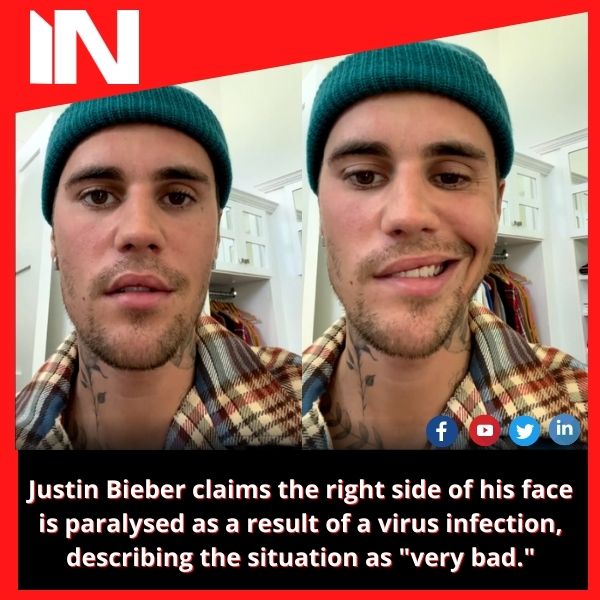 Justin Bieber, 28, has said that he has been diagnosed with a rare illness that has paralysed half of his face, and that his tour has been postponed until he recovers. On Friday, the Grammy winner posted a video to Instagram in which he discussed his health. He claims he has Ramsay Hunt syndrome, which causes facial paralysis and impairs facial nerves as a result of a shingles outbreak.

After cancelling gigs in Toronto and Washington, D.C., Justin released the video. The musician showed in the video that he couldn’t move one side of his face and described the condition as “very bad.” “IMPORTANT PLEASE WATCH,” he wrote in the caption. I love you all and ask that you remember me in your prayers.”

“I’m just physically, obviously not capable of doing them,” he stated in the video, adding, “My body’s telling me I’ve got to slow down.” “I hope you people get it.”

In just a few hours, Justin’s video got 14 million views and hundreds of prayers and well wishes for him in the comments area. “I love you so much,” Shawn Mendes wrote. “I have a lot of respect for you.” “Love you, dude,” Justin Timberlake wrote. I’m sending healing vibes and sending up prayers!”

Hailey Bieber, his wife, was sent to the hospital in March with a blood clot in her brain.

Justin rose to stardom when he was 13 years old when his mother uploaded his singing videos to YouTube. With smash singles like Baby and Believe, he went on to become a global pop sensation. He has two Grammy victories to go along with 22 nominations, including nominations for album and song of the year for Peaches this year.

At a ‘fantasy’ wedding, Britney Spears kisses Madonna once again and dances with Drew Barrymore and Selena Gomez