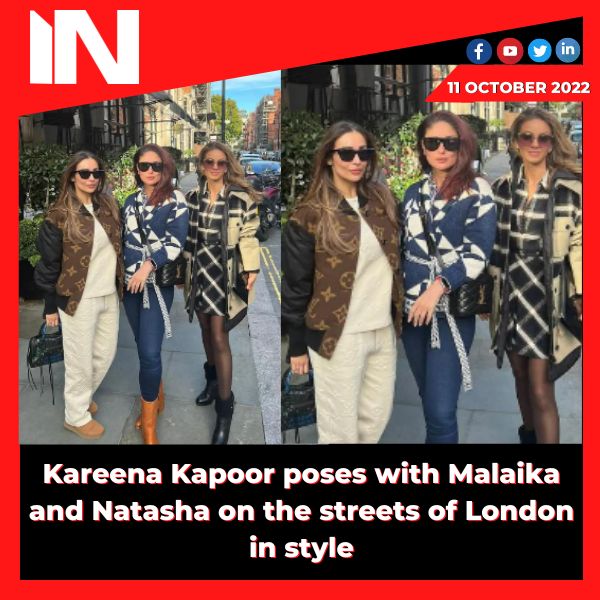 Kareena Kapoor is currently filming in London for Hansal Mehta’s movie. The actor took some time off from business to visit London and catch up with Natasha Poonawalla and Malaika Arora, two of her closest pals. The trio posed stylishly on a street in the UK’s capital while donning dark sunglasses. Natasha posted a picture on Instagram of their Sunday outing.

Natasha captioned the picture she posted on Monday, “Sundays done right… pals and my kiddos! My Karisma Kapoor and Amrita Arora were missed. To the caption, she added heart emojis. Miss you everyone, Amrita wrote in response to the message. Another admirer added, “Gorgeousness in one frame.”

Malaika Arora and Kareena also pouted and struck similar stances in the afternoon photo, in addition to sporting matching sunglasses. Kareena donned a white and blue jacket over blue denims, while Malaika chose a brown jacket over her beige top and matching leggings. Brown boots completed her outfit. Natasha was spotted wearing a jacket over a black-and-white outfit. They took a photo together in front of Scott’s restaurant in London’s Mayfair.

Malaika had also released a few photos with Kareena before. Malaika is currently in London with her actor boyfriend Arjun Kapoor. Kareena and Malaika were seen pouting in the first image while walking the streets of London. The two were dressed for the cold. In the second image, the buddies were clutching umbrellas. Malaika had captioned her image, “From Londres with love, Kareena Kapoor.” Images of Malaika and Kareena received a lot of likes and comments. “My beautiful girls,” Amrita had said.

At the Stamford Bridge stadium, Malaika and Arjun Kapoor recently attended a football game. Arjun supported Chelsea FC, his favourite team, and they won the match. On the other side, Kareena has been posting images from the UK where she is filming her upcoming movie. Recently, she posted a picture of herself from the set with the caption, “Day 1. What movie is 67 or 68? Hey guys, let’s get this done. A few of days later, she posted a second batch of images with the description “Freezing in the Forest but Must Pose for you guys.”

The last time we saw Kareena was in the Laal Singh Chaddha movie with Aamir Khan. The movie had its theatrical release in August and made its Netflix debut on Wednesday. Despite the movie’s poor box office results, some people are now applauding it after watching it on Netflix. The Hindi version of the Tom Hanks-starring Forrest Gump smash blockbuster from 1994 is titled Laal Singh Chaddha.

Ishaan Khatter recalls how Amitabh Bachchan assisted him in enrolling in a reputable university.

Vijay Deverakonda is always there for me, we talk, says Rashmika Mandanna about him.