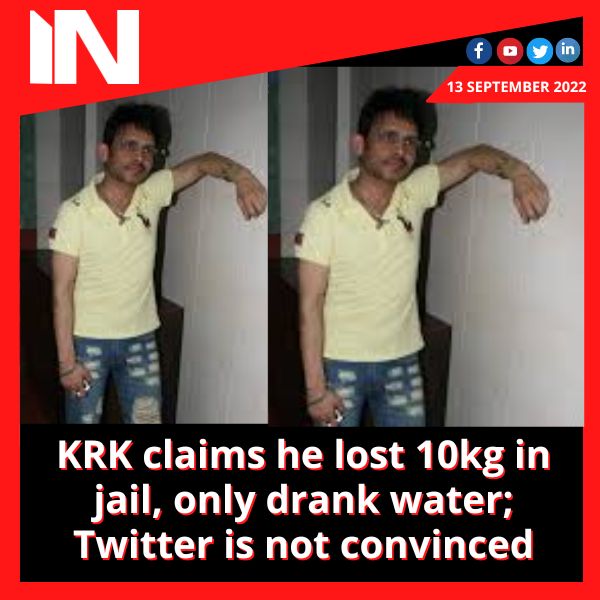 The actor and self-described film critic Kamaal R Khan, also known as KRK, recently made his Twitter comeback after serving time in jail, declaring, “I am back for my vengeance.” The actor and self-described film critic was granted bail a few days ago after being detained by police at the Mumbai airport in relation to his previous tweets about actor Akshay Kumar and other Bollywood celebrities, as well as a molestation case filed against him. After “surviving with only water” for 10 days while he was in jail, Kamaal provided an update on Twitter on Tuesday and claimed to have dropped weight.

Kamaal R Khan’s most recent tweet, which was about his health and elicited a variety of responses from Twitter users, came days after a message from the actor-turned-verified critic’s Twitter account claimed that he was being tortured and was receiving threats to his life. “I was surviving with only water for 10 days in jail,” Kamaal tweeted on Tuesday. Thus, I now weigh 10 kg less.

In response to KRK’s tweet, one individual asked, “How is it even medically possible? It is impossible to shed 10 kg in 10 days, not even with extreme labour and water consumption. Another person chimed in, “10 din me 10 kilo (10kg in 10 days), is it even feasible? Be it muscular mass or even fat, it is not doable.” ” A user of Twitter  wondered if she too could follow in KRK’s footsteps and achieve similar results. She tweeted, “Can I lose 10kg weight in 10 days by only drinking water?”


Don’t be frightened and make sure to retain the remaining 8kg of your weight, KRK saab, one person quipped on Twitter in reference to the actor’s weight. Another person shared a picture of Kamaal and commented, “Imagine losing another 10kg muscle mass from here.”

Others wondered why KRK did not review Brahmastra, the most recent movie starring Ranbir Kapoor and Alia Bhatt, which came out on September 9. The world is waiting for your Brahmastra review, someone tweeted, and another added, “Please review Brahmastra! Why did you end your review? In response to the tweet, a user wrote, “Let him breathe; he’s traumatised. Poor dude is in pain and people are asking him for a movie review.

KRK was detained in connection with two separate cases: a molestation allegation filed against him at the Versova police station in 2021 and a case involving allegedly offensive tweets about actor Akshay Kumar and director Ram Gopal Verma in 2020. Police in the 2020 case said that KRK’s tweets were communal and that he specifically targeted Bollywood actors. He claimed in his bail request that no crime had been committed and that the tweets in question were simply his opinions on the movie Laxmii Bomb (also known as Laxmii).

A fan claims that Ranjeet, who recently turned 81, looks 30 years younger in a video he shared