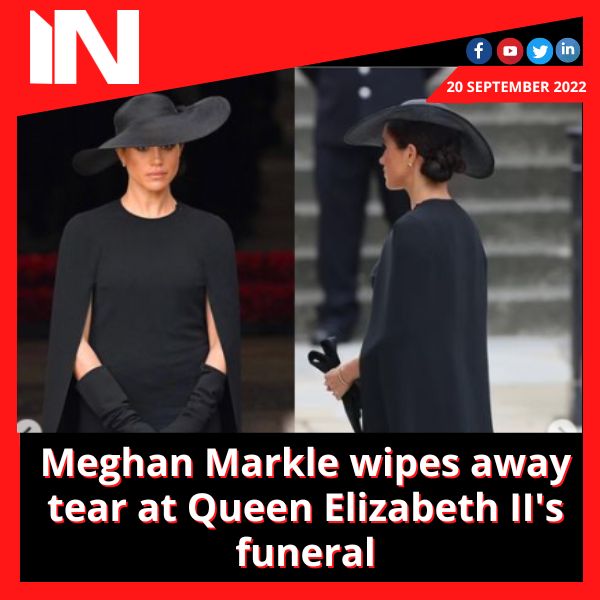 The Duchess of Sussex, Meghan Markle, a former actress, shed a few tears during Queen Elizabeth II’s royal burial in London’s Westminster Abbey. Meghan may be seen wiping away tears in a number of the photos that surfaced online. During the service, Meghan was seen holding hands with her husband, Prince Harry, Duke of Sussex, while also displaying tears streaming down her face.

In images posted by a fan account on Instagram, Prince Harry could also be seen attempting to hold back tears. Before Queen Elizabeth II’s casket was brought to Hyde Park’s Wellington Arch, they broke down in tears in front of Westminster Abbey. After that, it was brought to Windsor’s St. George’s Chapel, where she was interred.

In response to the images, a fan stated, “She deserves respect because she is the wife of the Queen’s grandson. There is nothing you can do to change the fact that she loved Her Royal Highness.” Another individual said, “You are the picture of grace and refinement, Duchess of Sussex. Angels are protecting Harry and you.” “Meghan and Harry are the truest ones there,” read the comment.

800 mourners, many of whom were members of the queen’s staff, joined members of the royal family earlier on Monday for a committal service in the chapel. It was the final public event to conclude ten days of national mourning, which included massive military parades and miles-long lines in London to see the queen’s coffin lying in state.

Meghan and Harry “appear to have been uninvited to the state reception at Buckingham Palace,” according to a report published by The Telegraph last week. The event was hosted by King Charles and Queen Consort Camilla. According to the paper, “it is still not clear why they were invited to an event that Royal aides said they were not expected to attend.” According to sources cited in the newspaper, the pair was “baffled” by the mix-up.