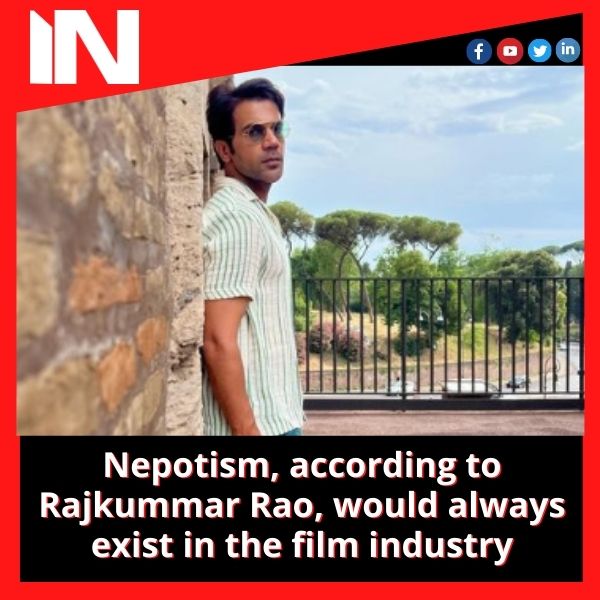 Nepotism in the film industry, according to actor Rajkummar Rao, “will always be there.” In a recent interview, Rajkummar added that there are plenty of prospects in the sector even though there is some nepotism. He talked about his friends and classmates who are becoming well-known on OTT platforms, such as Pratik Gandhi and Jaideep Ahlawat.

Love Sex Aur Dhokha (2010) was Rajkummar’s acting debut, but he rose to prominence with supporting appearances in Gangs of Wasseypur-Part 2 and Talaash: The Answer Lies Within (2012). The White Tiger, Stree, Aligarh, Ludo, Newton, Kai Po Che, Shahid, Queen, Bareilly Ki Barfi, and others all featured him. Shahid earned Rajkummar the National Film Award.

Rajkummar stated, “Nepotism will always be there, but there are numerous options now,” in an interview with India Today. I have acquaintances who were in my class but are now well-known because of OTT platforms. like Pratik (Gandhi) in Scam 1992 and Jaideep (Ahlawat), who performed admirably in Pataal Lok. There will be nepotism, but your talent and work will speak for yourself.

He also discussed popular movies and the genres of movies he likes. No one is aware of the secret to making a successful movie; you must keep trying and then trust fate. I haven’t really considered why South Asian movies are successful; perhaps it’s because they’re good movies and the effort paid off.

Nevertheless, I think that cinema goes through stages. At one point, we were filming music videos in Switzerland, after which we began presenting stories about small towns, and now it’s time for the larger-than-life cinema that the South has to offer. However, as an actor, I prefer to work on projects that I can be proud of, rather than necessarily successful ones. I can continue to tell stories as long as my producers don’t suffer financial loss. I would rather make movies that I can be proud of. I’m not interested in belonging to a herd. If my movies don’t gross $100 crore at the box office, that’s fine, he continued.

In the upcoming action-thriller movie Hit: the First Case, Rajkummar will star opposite Sanya Malhotra. The anticipated thriller, which is being directed by Sailesh Kolanu, is a Hindi translation of the Telugu original of the same name. The movie will debut in theatres on July 15.

Rajkumar will appear in many other films besides Hit. He is starring alongside Janhvi Kapoor in Sharan Sharma’s Mr. and Mrs. Mahi. Rajkummar also appears in the films Bheed by Anubhav Sinha, Second Innings by Abhishek Jain, the biopic of Shrikanth Bolla, and Swagat Hai by Hansal Mehta.