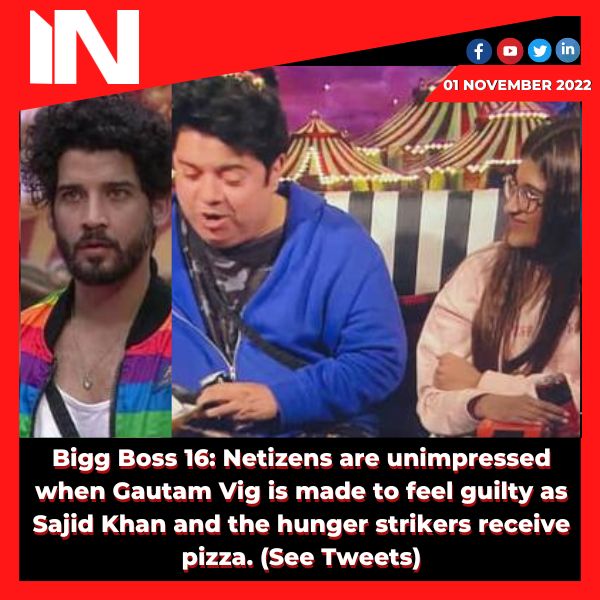 Recently, Bigg Boss 16’s most recent episode came to an end. In the episode, we witnessed some of the housemates voicing their displeasure with Gautam Singh Vig and his captaincy, including Sajid Khan, Nimrit Kaur Ahluwalia, MC Stan, Gori Nagori, Shiv Thakare, and Abdu Rozik. Gautam was given the chance to be the captain in the previous Bigg Boss 16 show, but he had to forgo the meals for the entire house. Gautam initially declined but then agreed. Everyone in the home lambasted Gautam as a result, with the exception of Soundarya Sharma. The housemates retaliated against Gautam in tonight’s episode.

Bigg Boss 16: Pizza is served to the hunger strikers, including Sajid Khan

Sajid Khan, Shiv Thakare, Gori Nagori, and MC Stan went on a hunger strike to protest Gautam Singh Vig in the most recent Bigg Boss 16 show. While Abdu Rozik and Nimrit Kaur Ahluwalia are also on a hunger strike, Nimrit accepts food from Soundarya while Abdu takes food from Bigg Boss. To try and teach Gautam a lesson, Bigg Boss calls everyone and tells them not to skip meals. He assigns them the chore of separating the grains of rice and daal from a large platter as their fictitious punishment.

As they divide the food grains and act out being punished outdoors in the living room, Sajid, Nimrit, Shiv, Gori, Stan, and Abdu eat pizza in the confessional. According to Bigg Boss, they will receive a ration this manner for the entire week instead of from Gautam.

Internet users are angry about the pizza party.
Gautam often reminded everyone to consume meals, showing that he sincerely cared about them all. He continued to be hungry while carrying out his captain’s responsibilities. But despite eating pizza, the hungry strike gang persisted in making him feel bad. Viewers are shocked by this. View the Twitter comments here:

When Sajid Khan was given pizza, he altered the way he spoke to Gautam. He let go of his rage and approached Gautam to start a conversation. Sajid was openly cursing Gautam and his family prior to being fed.