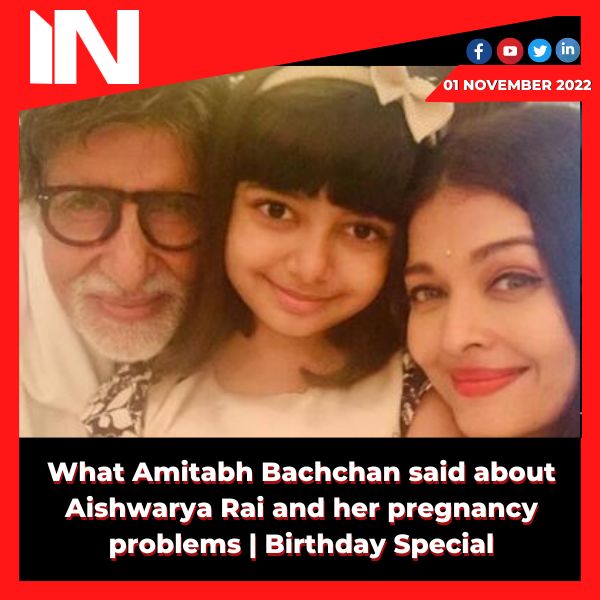 Aishwarya Rai has consistently upheld her standing as a talented actor, a well-known global figure, a devoted wife, daughter, and mother. The actress has always been at the forefront of defying convention, and she did the same with her pregnancy. The international celebrity who became one of the most well-known figures in Bollywood after winning the Miss World crown in 1994 wed actor Abhishek Bachchan, the son of megastar Amitabh Bachchan. The two welcomed their beautiful baby Aardhya Bachchan on November 16, 2011. Here’s a look back at Aishwarya during her pregnancy as she celebrates her birthday on November 1st.

Aishwarya Rai Bachchan had a “late” pregnancy because she was 38 years old when she became pregnant with Aaradhya. Even if there were certain difficulties, Aishwarya chose a normal birth at a period when women felt more at ease having C-sections. Even the painkillers were rejected.

Amitabh Bachchan, Aaradhya’s grandfather, spoke extensively about Aishwarya and her pregnancy troubles after Aaradhya was born in 2011. He spoke to the media about Aishwarya’s tenacity and her labouring experience. We arrived there on the 14th evening after the doctors had informed us that the baby may arrive at any time. On the morning of the 16th, she gave birth to the child. This was a typical delivery; nowadays, many women choose C-sections and other procedures, but Aishwarya wanted a typical delivery.

She had to fight, but I applaud her for being in intense labour for such a long time—nearly two to three hours. She insisted, however, that she wanted a routine delivery. According to Big B, she didn’t need an epidural or any painkillers, according to Indian Express.

Most recently, Aishwarya Rai had an appearance in Ponniyin Selvan I, Mani Ratnam’s visionary film. In the movie, the actress portrayed Nandini, The Queen Of Pazhuvoor. Regarding her persona, Aishwarya expressed her happiness that the narrative acknowledged these powerful women of substance. Women have historically been powerful. It’s just that opportunities have changed over time, according to the actress. She also praised Ratnam for giving women in this historical play the freedom to pursue their goals.

“It’s fantastic how women in this story either possess or discover a means to display their power. These women were created by the artist Mani Ratnam. He has asked us (actors) to go beyond the words and script and bring the character’s thought to life after working with him on multiple movies. All of my characters in his movies receive the same intelligence-enhancing treatment from him, she said.

Samantha To Meet Nagarjuna, Naga Chaitanya Following Myositis Diagnosis? What We Know Is This

Bigg Boss 16: Netizens are unimpressed when Gautam Vig is made to feel guilty as Sajid Khan and the hunger strikers receive pizza. (See Tweets)