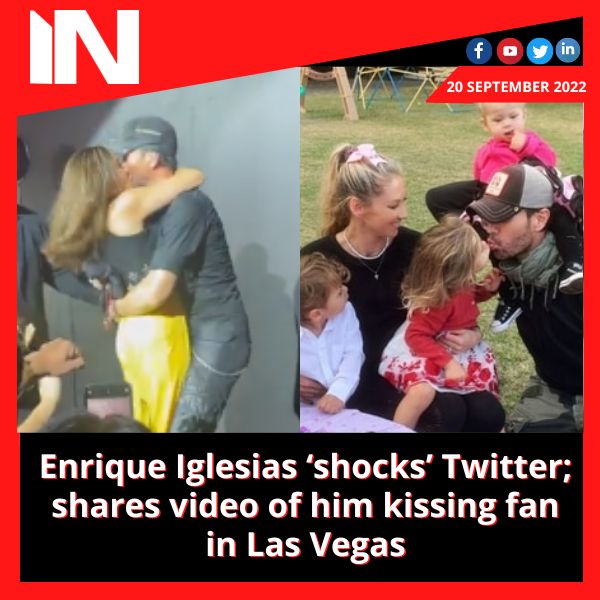 When he released a video of himself kissing a fan at a recent meet and greet event in Las Vegas, Enrique Iglesias surprised Twitter fans. Before kissing the fan on the lips, the singer, who has been in a relationship with former tennis star Anna Kournikova for more than 20 years, was seen kissing the fan’s cheek. Many people on Twitter criticised the singer for grabbing the fan by the waist and allowing her to take photographs of their kiss before departing the stage with his security team. They called the behaviour “inappropriate” and “awkward.”

Three children have been born to Enrique and Anna Kournikova over the course of their approximately 21-year relationship. The musician posted a video of the performance on his Twitter and Instagram accounts on Sunday, adding, “Friday night in Las Vegas @resortworldlv see you tonight!!!!” in the caption. More than a lakh people have watched the 11-second video of the musician kissing his fan on Twitter alone.

Many people on Twitter were not pleased with Enrique’s kiss with the fan. Some people worried that his longtime partner Anna would not approve of the video. Even though the two haven’t publicly declared their marriage, someone tweeted, “Wont your wife be upset?” How in the world can Anna put up with this, read another tweet. Another person added, “I’m confused… Anna is she okay with this? That’s not me. “So improper of this woman and for you to let her do that,” another Twitter user added. I have a feeling Anna won’t be pleased. Someone only stated, “Shocked.”

In addition to their two-year-old daughter Mary, Enrique and Anna also have identical twins Nicholas and Lucy who are four years old. The musician recently claimed that the music video where he first met the children’s mother was watched by his kids. While creating the music video for the singer’s 2001 single Escape, Enrique and Anna became friends. Since the beginning of the millennium, there have been rumours of their marriage, but neither of them has acknowledged anything.