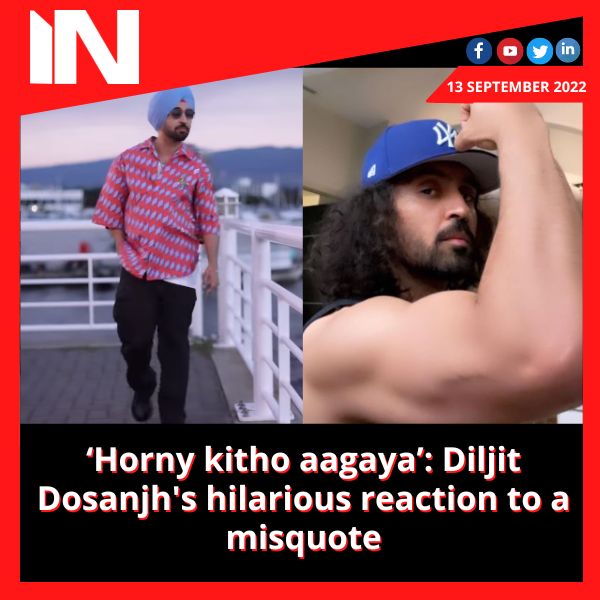 Diljit previously uploaded a picture of himself flexing his muscles to his Instagram account. “I’m sexy and I know it,” he had written as the caption for the photo. In the photo, Diljit was wearing a blue cap and a black sleeveless T-shirt while raising his right arm to display his well-toned biceps. Lilly Singh, a comedian and TV host, added the word “hurrrrrrrr” and a period.

Diljit continues to post pictures and videos of himself, offering his followers a peek into his daily activities. He just published a video in which he cooked as his cook watched. Dilit was observed making fun of him and making fun of him. He published a video of himself making instant noodles a few weeks ago. Additionally, he posted a video on Instagram in which he displayed his inner salesman.

Diljit is presently engaged in his Born to Shine globe tour. Additionally, he has appeared in movies like Good Newz and Udta Punjab. Alongside actor Sargun Mehta, Diljit will appear in the upcoming family-friendly Punjabi movie Babe Bhangra Paude Ne, which is scheduled to hit theatres on September 30.

He will appear in the 1984 Sikh riots-inspired historical emotional thriller Jogi. The key characters in the movie are also played by Mohammed Zeeshan Ayyub, Kumud Mishra, Amyra Dastur, and Hiten Tejwani. The movie, directed by Ali Abbas Zafar, will only be available on Netflix starting on September 16.

According to news agency ANI, Diljit had discussed his part in the movie. He had remarked, “I am looking forward to my digital debut on Netflix. Playing the character of Jogi has been one of the most satisfying experiences.” I want to thank Ali and Himanshu for giving me this role; the entire team has put in a lot of effort to bring this lovely story to life. I am looking forward to audiences watching our film and showing their love.”