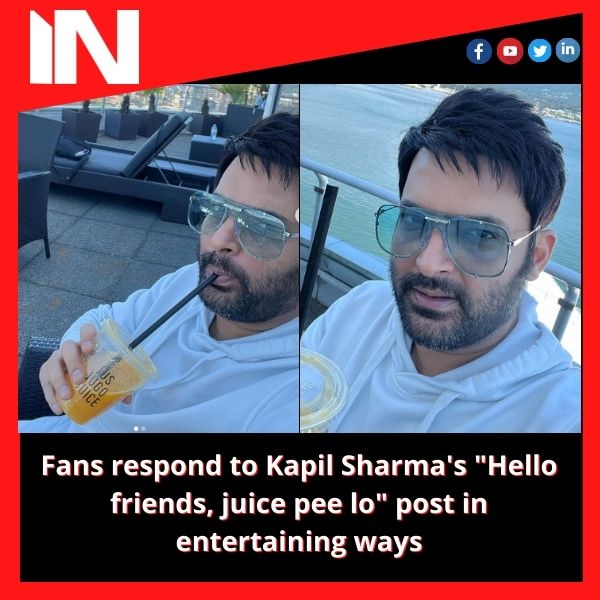 On his current international tour, comedian Kapil Sharma is making the most of his time away from home. He recently uploaded several images of himself sipping a drink. But his caption, which said simply, “Hello friends, juice pee lo (drink juice),” had his supporters in stitches.

The words “Hello friends, chai pilo” from vlogger Somvati Mahawar’s video, which later became one of the most popular memes, served as the inspiration for Kapil’s caption. The same kind of response to Kapil’s post came from his followers.

“I believe I’m going to buy juice after seeing this, craving shuruuu,” DJ Goddess wrote in response to the post. “Aap la kar dedo..nhi bhej do,” an admirer remarked, “you can send me some.” “Thanks aap piyo (you have it) – you are not done yet,” one person said. Even a supporter chimed in, “Lagta he pehlibarr pi rahe. (It appears like you are drinking juice for the first time because you posted a video.) Someone another questioned, “Are you drinking juice for the first time, sir?”

During his performance in Vancouver, Canada, recently, Kapil paid a moving homage to the late vocalists Sidhu Moose Wala and KK. He sang 295, a popular song by Sidhu. In the background of the video, the phrase “Tribute to Legends” could be seen, along with images of Sidhu Moose Wala, KK, Deep Sandhu, and Sandeep Singh Sandhu.

In front of the audience, he made fun of his wife Ginni Chatrath in a humorous selfie video that he also uploaded. He said, “Ginni, tu meri kabhi nahi sunti, dekh kitne log mujhe sunne aaye hain,” while filming and standing in front of the enormous throng. You never pay attention to me, Ginni, wo bhi ticket kharch ke. However, as you can see from how many people have come to hear me

Remo D’Souza receives advice from Bhagyashree about being a “great spouse.”

Are You Serious?, Karan Kundrra snarls at Tejasswi Prakash’s fan pages. Learn why.