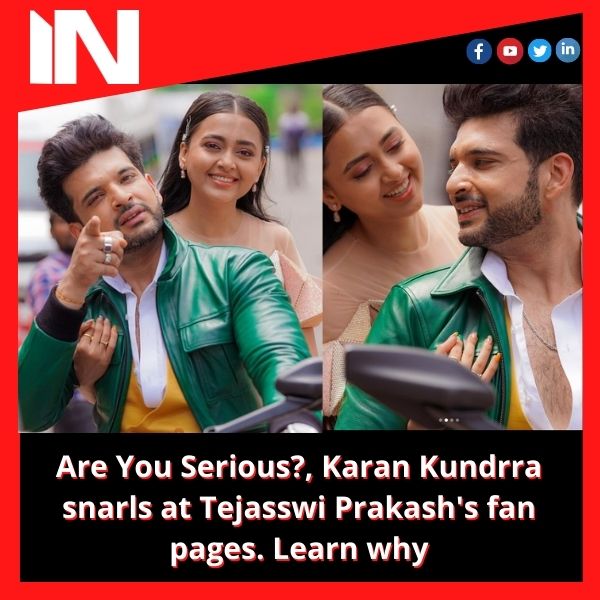 One of the most well-known couples in the television industry is Tejaswi Prakash and Karan Kundra. While competing on Bigg Boss 15, the two actors discovered love and made their relationship official. Their followers drool over their chemistry and adorable social media posts and images. Their adoring nickname among admirers is “Tejran.” Every day, Tejasswi and Karan have given their followers fresh reasons to adore and admire them.

Another evidence of their love for one another, support for one another, and inability to tolerate bullshit emerged today. On his Twitter account, Karan criticised several Tejasswi Prakash fan accounts for disseminating photoshopped and altered depictions of abuse.

Wow, he wrote. Some fandoms have fallen to the lowest of lows by abusing photo editing and morphing. You must be so proud of them T #AreYouSerious!!!! Khud ki beizzati, LOL.

His girlfriend Tejasswi Prakash responded to his remark in a timely manner, and the actress also denounced such fan pages. “Proud of?,” she tweeted. M perplexed People that think this of you, or anyone else for that matter, can’t possibly be my fans. I’m still with my partner to help him comprehend… But when you utter such strong remarks against someone, people need to understand… Peace can be broken by humans.

Speaking of Karan, he currently serves as the host of the hit reality series “Dance Deewane Juniors.” He will soon appear in a movie alongside Randeep Hooda and Ileana D’Cruz.

Advertisement
Related Topics:FanKaranKundrrapagesseriousTejasswiPrakashwhy
Up Next