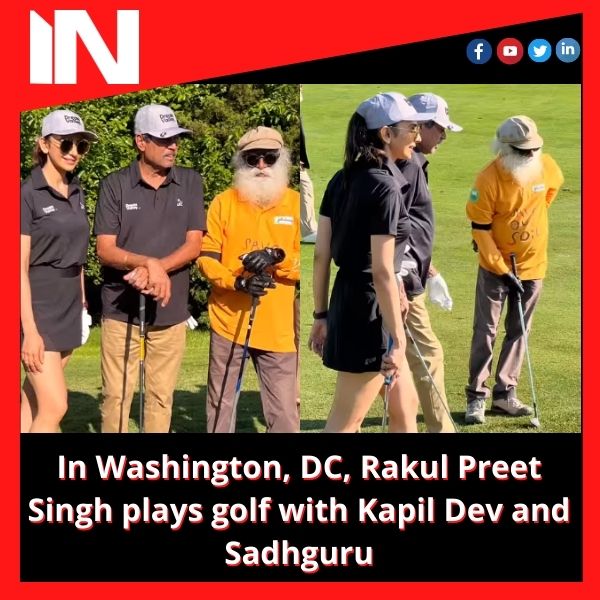 Actress Rakul Preet Singh uploaded a photo from a recent round of golf she played in Washington, D.C. Kapil Dev, a legend in cricket, and Sadhguru, a spiritual teacher, accompanied her. “What better than kicking off ATA conference at Washington DC with @sadhguru @therealkapildev,” Rakul said on her Instagram account.

According to the video, Rakul, Kapil Dev, and Sadhguru spent most of their time socialising with other people at the golf course. Rakul chose an all-black sports outfit for the game, while Sadhguru wore a t-shirt advertising his Save Soil Movement. Kapil, on the other hand, wore a t-shirt and casual pants. Rakul was also shown in the game’s video between a shoot. She also autographed hats for guests who were in attendance.

A viewer’s response to the video was “Kya baat hai (Amazing).” Another fan remarked, “Everything seems fantastic,” to the conversation. Ayushmann Khurrana, who will co-star with Rakul in his next movie Doctor G, was also drawn to the video.

In a different video that Sadhguru posted, the guru successfully executed the blind putt move. Rakul and Kapil, meanwhile, were absent from the little video. On the 18th hole, Sadhguru was ready to make a birdie when he was challenged to putt blindly in search of an albatross.

Rakul last appeared in the Ajay Devgn movie Runway 34. The movie is reportedly based on a genuine story from 2015, when a Doha to Kochi flight narrowly avoided disaster after having trouble landing at the airport due to poor weather and poor sight. The Federation of Indian Pilots (FIP), however, claimed that the movie gives an incorrect impression of pilots. As quoted by ANI, the FIP said: “While we all enjoy being entertained and respect the artistic licence of a movie director, a thrilling tale should not be viewed as a true depiction of the extraordinary professionalism among airline pilots who fly thousands of flights every day responsibly and safely without incident and fanfare.

Advertisement
Related Topics:dcFeaturedgolfkapildevplayspreetsingRahulsadhguruWashington
Up Next

“Deepa Mehta made me think I can be in every frame,” said Huma Qureshi

Natasha Dalal, the wife of Varun Dhawan, is hosted by Janhvi Kapoor at a boat party, according to a friend of hers