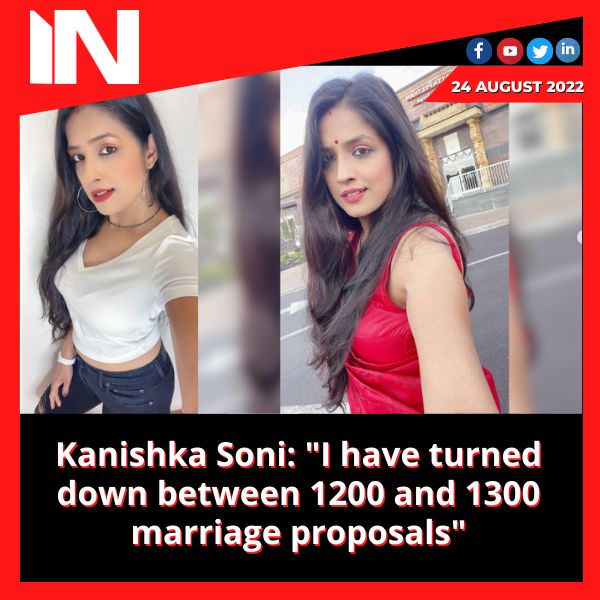 Recently married Kanishka Soni has admitted that most of her relationships have been unpleasant. She disclosed that she was in an abusive relationship in a recent interview. She also mentioned that she was frequently approached in the business in exchange for work. (Read about Kanishka Soni’s experience with backlash after she wed herself.)

Earlier this month, Kanishka Soni attracted attention when she revealed on Instagram that she had wed herself. The actor’s TV programme Diya Aur Baati Hum is its most well-known work. Among other TV series, she has appeared in Pavitra Rishta, Devon Ke Dev… Mahadev, and Mahabali Hanumaan.

She stated in an interview with Dainik Bhaskar, “I had many proposals from males when I first arrived in Mumbai, but I’ve only accepted 1200–1300 of them. A very well-known actor made me a marriage proposal, but after only two months, his identity was made public. He used a lot of force. He was very violent and would become enraged every 15 minutes; he would damage things and beat me, but I won’t use his name for fear of stirring up controversy. One should only be with one person at a time, my mother has always advised me. I dragged on with the relationship for 1.5 years. I had to leave the relationship after five years.”

She added that once, after a whole day of filming, she was fired from a TV show because she “did not go to the producer’s room.” She added that when she attempted to convert from performing to working in production, producers approached her as well.

Kanishka continued to speak to the Hindi daily, “The producer invited me to go to his house in 2008 for an A-grade film so he could view my tummy. I promised him I would for the movie. But he questioned how I would do it for the movie if I didn’t do it here. For me back then, exposing my stomach was a big deal.

I got to work on few low-budget movies because of Babubhai Dibha, but I always wanted to be like Priyanka Chopra and Kangana Ranaut. She also stated that she turned down an item song for the Akshay Kumar-starring movie Housefull, but she ultimately performed it for Srikanth Deva, a Tamil music director.

In photos that Kanishka recently posted on Instagram, she could be seen wearing sindoor (vermilion) and a mangalsutra, a sacred string worn around the neck by married Hindu women. The actor had stated, “Married to myself since I accomplished all my aspirations on my own and the only person I am in love with is myself,” claiming she did not need a partner in her life.

On filming in the historic part of Delhi, Divyanka Tripathi said, “My team constantly trying to hide me”