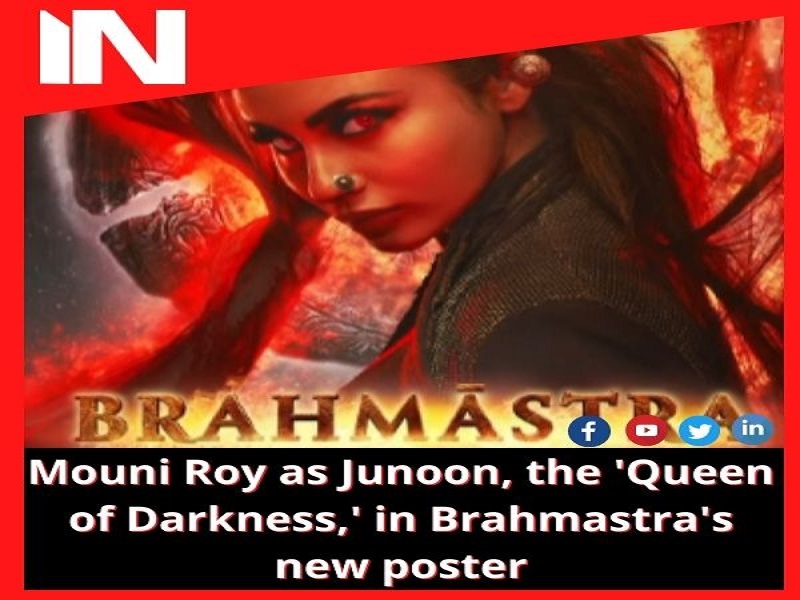 On Tuesday, a day before the trailer’s release, the Brahmastra crew released a new motion poster for the film. Junoon- Queen of Darkness was played by Mouni Roy on the poster. On their Instagram profiles, the film’s producer Karan Johar, director Ayan Mukerji, star actress Alia Bhatt, and Mouni herself shared the new poster and discussed the role.

Mouni, who would purportedly play the adversary in the film, was depicted in a wicked form on the poster, fighting with Ranbir Kapoor’s Shiva for the Brahmastra. The actress posted on social media about the billboard, ” “AFTERNOON. After 5 years of waiting, the possibility has finally arrived. Andhere ki rani hai, kar le sabko vash mein apne. Junoon ne thaani hai, Brahmastra ko haasil karna (She is the Queen of the darkness who can control others, Junoon is determined to procure Brahmastra). Meet Junoon, the Dark Forces’ leader… our Mysterious Queen of Darkness! Junoon will be featured in our Trailer tomorrow!”

Ayan Mukerji described Mouni as a “surprise package” who will make a cameo appearance in the film, which will be released in theatres on September 9. Mouni ‘killed it’ with her performance, he added, adding the crowd will be talking about her when they leave the theatres.

“A lot of people, I imagine, are going to walk out of Brahmstra, talking about Mouni’s Performance as Junoon,” he said on Instagram. Moun, who has a deep faith in and dedication to Lord Shiva, has always had a natural grasp of Brahmstra, and with that understanding, she nailed her role in our film! I offered her a’special appearance’ in Brahmstra during our first meeting. She eventually joined us for a shoot.

The film’s character posters for Amitabh Bachchan and Nagarjuna have previously been unveiled. In Brahmastra, Ranbir and Alia will play Shiva and Isha, respectively, in their first film together. The planned film is the first of three instalments in a fantasy epic.

Advertisement
Related Topics:brahmastradarknessjunoonmouniroyposterQueen
Up Next