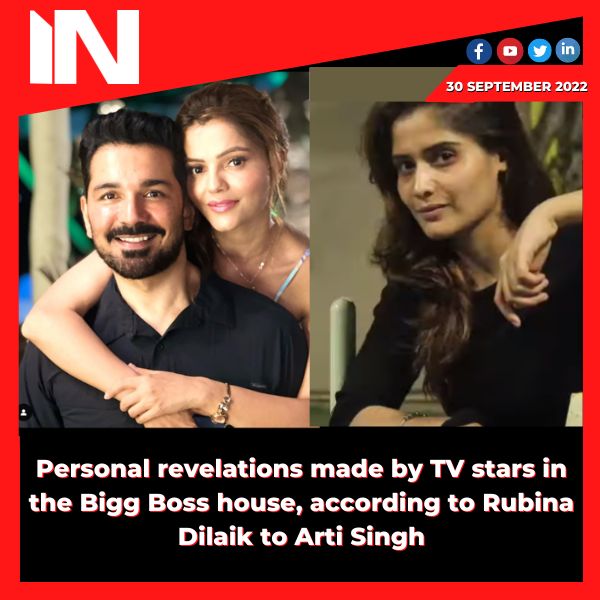 A few days before Bigg Boss 16 airs, let’s take a look at some of the episodes from this reality series that everyone found shocking. The participants come into the Bigg Boss house as strangers, but after living together for a while, they often become friends and open up to them. While all of the contestant’s movements are being recorded by the cameras, after a while, the contestants grow accustomed to it and stop realising that they are constantly being observed. Actors often keep their personal affairs private, but they occasionally divulge information about them on public television. Let’s look at this:

Bigg Boss 14 contestant Rubina Dilaik
During the pandemic, Rubina Dilaik spoke up about her troubled marriage to Abhinav Shukla. The couple tried to give their union one more try by being together for the following six months, but destiny had other plans for them. After taking part in Bigg Boss 14, their relationship became even closer than before. The “IT” duo in the television industry is dubbed Rubina and Abhinav.

Bigg Boss 14’s Eijaz Khan
After a protracted absence, Eijaz Khan returned to the Bigg Boss 14 house and disclosed that he had been assaulted as a child. He acknowledged that this was the main cause of his discomfort with other people’s “touch.” Eijaz had only told his therapist about this, and even his father was unaware of it. The actor said that since he wasn’t at fault, he had no reluctance in sharing this in the open.

Bigg Boss 13 contestant Rashami Desai
Rashami Desai gave an emotional speech inside the Bigg Boss 13 house and revealed how her family believed she was cursed since she was a “female” She was treated unfairly because of her gender and cut ties with them. Following Bigg Boss 13 that the actress’ relationship with her mother strengthened.

Bigg Boss 13’s Arti Singh
Everyone was surprised by Arti Singh’s disclosure, and sister-in-law Kashmera Shah offered her assistance from outside the Bigg Boss house. Arti revealed that when she was 13 years old, her tutor molested her while she was imprisoned in a room. “Two and a half months ago, I experienced a panic attack. When I was 13 years old, I experienced my first panic episode, which continued for a full year. People frequently assume that I must be depressed and that a guy may have abandoned me. When I was 13, my own servant attempted to rape me inside my own home, which made me upset “Arti Singh recounted.

Bigg Boss 14 contestant Vikas Gupta
In Bigg Boss 14, Vikas Gupta made another appearance. He acknowledged having a debt of Rs 1 crore. Back then, the creative producer admitted being mentally unstable and having a bad relationship with his mother and brother.