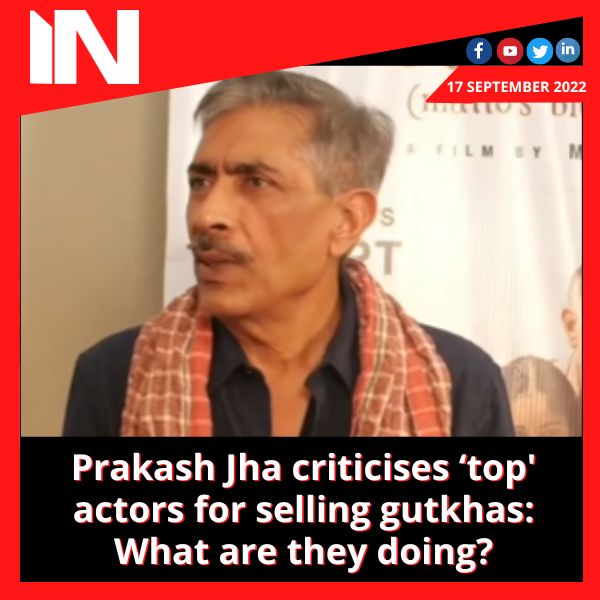 Prakash Jha, a director and producer, has complained of “great, renowned actors” selling gutkha (tobacco) and refusing to appear in his movies. Prakash addressed his earlier remark that he finds it difficult to cast stars in a new interview. He added that it had been a while since he had worked on a movie with a “huge celebrity.” Prakash further stated that celebrities will “come to me instinctively” when they take time away from tobacco sales to concentrate on content.

When asked if he believed performers didn’t take responsibility for their work, he responded that they didn’t have the time since an actor who had “five flops” and was “shooting for 12 ad films” and collecting “10 crores for each of them” didn’t have the time. Additionally, Prakash stated that his “entirely is on content.”

Prakash stated in a conversation with Times of India, “There are 5 to 6 performers. Take a look at how these actors are doing. Why would they participate in one of my movies when they can make 50 crores from one gutkha advertisement? They are hawking gutkha, the actors. Can you picture it? What exactly are these renowned performers doing? For location scouting, we had visited a school. I was questioned by the school’s principal what I was doing in the Mumbai film industry. Our school’s male students have been observed chewing gutkha. There are large billboards set up where all of our great personalities are selling various varieties of gutkhas (tobaccos) and paan masalas as you travel through the northern cities of Lucknow, Prayagraj, and Mugalsarai.”

When discussing the “star system,” he stated, “What are the options for the system? Unless and until we make changes to the way we make movies. The subject comes first in the making of a movie, not the budget. It all begins with the love of filmmaking. With the 500 crore funding you have, it cannot begin, therefore everything is possible. That is what is taking place. I haven’t even rested for a day. I haven’t stopped creating content. Although I haven’t recently produced a movie with a major star, I have produced other things. I’m content with that, so it’s fine. Stars will naturally contact me when they want to concentrate on content rather than selling gutkhas.”

Additionally, he created the web series Aashram, which includes Vikram Kochhar, Bobby Deol, Aaditi Pohankar, Darshan Kumar, Chandan Roy Sanyal, Tushar Pandey, and Anupriya Goenka among others. The first season debuted on MX Player in August 2020, followed by the second season in November 2020 on the OTT service. The series has been renewed for a fourth season, which is anticipated to premiere next year. The third season debuted in June 2022.

Kangana Ranaut calls PM Modi ‘most powerful man’, wishes him on his birthday

Abhidnya Bhave reminisces about her husband’s battle with cancer: It was terrible