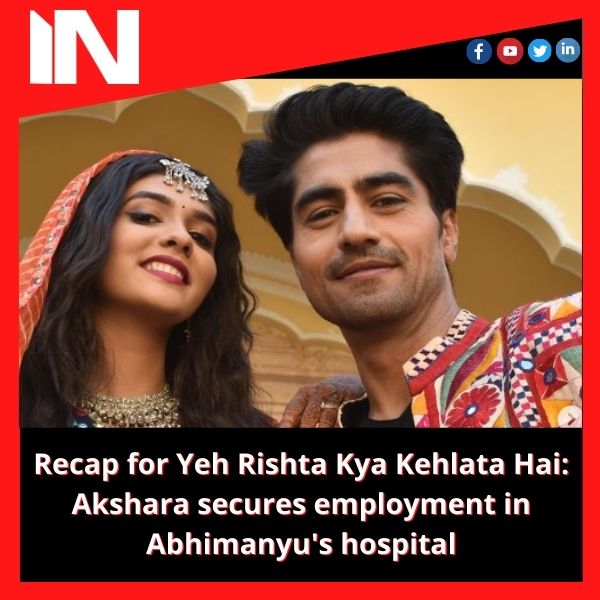 An intriguing surprise in the most recent Yeh Rishta Kya Kehlata Hai episode could permanently alter Akshara and Abhimanyu’s lives. Abhimanyu is still stunned by Akshara’s decision to rejoin the Birla hospital. How will their relationship evolve as a result of this new development? Learn more by reading this article.

Abhimanyu and Akshara took each other’s sides in front of their families in the previous episode’s climax. When Suhasini sees Akshara in trouble, she tries to speak with Abhimanyu. She advises her to get to know Abhimanyu better before deciding whether or not to marry him. She reassures Akshara that relationships can be challenging even when there is love and adoration between the partners. Suhasini’s counsel appears to be welcomed by Akshara, who may be considering offering

Akshara is torn between thinking about how to proceed with Abhimanyu and battling his emotions at the same time. He hears Dr. Rohan discussing a case with Akshara. Dr. Rohan, who had been upsetting him, storms out of the room so that Akshara and Abhimanyu could converse. While still unhappy, Abhimanyu also misses having Akshara in his life. Even the young patient they are attending to recognises their predicament and advises Abhimanyu to make amends with Akshara. To learn what they did, keep reading.

The Birla Hospital’s board of directors makes the unexpected decision to revive the music programme after being impressed by Akshara’s performance at work. As a part of her overall

hidden scheme, hires Akshara for the position. Abhimanyu quickly goes to the workplace after learning of the music department’s reopening. When he discovers Akshara there, he immediately takes her to speak with Mahima and Anand out of instinct. He picks another fight with Mahima and Anand, this time alleging that they were behind his rash choice.

Abhimanyu is informed that Mahima and Anand were forced to rehire Akshara because of pressure from the board, which they were unable to resist. Akshara cuts off the conversation and informs Abhimanyu that she chose to accept the position and that no one else is to blame. The reality has stunned Abhimanyu, but it is too soon to say how their relationship would change as a result of this unexpected development. Will they grow apart or closer together? What is Mahima’s covert strategy? Continue reading HT highlights for all the latest information as the following episodes are predicted to contain a lot more drama and fun.

Advertisement
Related Topics:aksharaemploymenthospitalrecapsecuresyehrishtakyakehlatahai
Up Next

Hina Khan and Rohan Mehra, who co-starred in Yeh Rishta Kya Kehlata Hai, are back together

Sarath Kumar, Venkatesh, and Khushbu pay tribute after the death of Meena’s husband in Tamil