Amit Shah, the Union Home Minister, will visit West Bengal on Thursday for the first time since the Trinamool Congress (TMC) swept to power in the state for the third time last summer, amid rumblings within the Bharatiya Janata Party (BJP) following losses in by-polls and a series of defections.

The BJP, which had set a goal of winning 200 of the 294 seats up for grabs in the 2021 West Bengal assembly elections, only got 77, while the TMC got 213 after a bruising campaign. After losing two assembly seats to the TMC in by-elections, the BJP’s vote total has dropped to 70. Five BJP legislators have joined the TMC without resigning from the opposition.

On Thursday, Shah will speak at a public meeting in Siliguri, north Bengal, which has emerged as a BJP stronghold. He is expected to visit the Teen Bigha Corridor and speak with Border Security Force (BSF) officers on Friday.

On Friday, Shah will meet with the Bengal BJP’s top state office-bearers, departmental heads, legislators, and members of Parliament in Kolkata, according to Bengal BJP leaders.

The meeting will take place amid rumblings within the BJP’s Bengal unit, which resurfaced following the party’s losses in by-elections last month in Kolkata’s Ballygunge assembly and Asansol Lok Sabha seats. Babul Supriyo, a former Union minister who joined the TMC after leaving the BJP, won the Ballygunge seat. Shatrughan Sinha, an actor-turned-politician and a former BJP leader, was elected to the Asansol seat on a TMC ticket.

Former BJP state chief Dilip Ghosh called his successor Sukanta Majumdar an “inexperienced” leader days after the by-election defeats. Majumdar, who retorted that Ghosh was inexperienced when he was appointed BJP state president in 2015, took over as state chief in September of last year. Following an organisational reshuffle in December, he was chastised. Majumdar formed new committees to accommodate some of the functionaries who were left out, but he was unable to silence his critics. Amitava Chakravorty, the state general secretary (organisation), was also summoned to Delhi by the central leadership amid calls for his replacement.

Separately, Shah will lay the foundation stone for Maitri Sangrahalaya, a museum dedicated to the BSF’s role in the 1971 India-Pakistan war that resulted in the creation of Bangladesh. During his two-day visit to West Bengal’s Sunderbans, he will unveil six floating border outposts (BOPs) and a water ambulance along the India-Bangladesh border. “The BOPs and ambulance will be stationed in the Sunderbans…along the Indo-Bangladesh border…[the BOPs have been named] Sutlej, Narmada, Kaveri, Ganga, Sabarmati, and Krishna,” a BSF officer said.

The India-Bangladesh border in West Bengal is the world’s longest and most porous international border, with smuggling, trafficking, and other illegal activities rampant. West Bengal shares a 2,216-kilometer stretch of the 4096.7-kilometer border with Bangladesh. The border in south Bengal is over 900 kilometres long, with nearly 60% of it being riverine. The Sunderbans, India’s largest delta with 9600 square kilometres and 102 islands, is home to a large portion of the riverine border. Among the endangered species found in the delta are the Royal Bengal Tiger and estuarine crocodiles.

The number of floating BOPs is being increased and equipped with modern equipment, according to BSF deputy inspector general (South Bengal Frontier) SS Guleria, to strengthen security and enhance surveillance in the Sunderbans’ inaccessible areas.

Rahul Gandhi is reportedly considering a run for Congress president.

After meeting Sonia Gandhi in the hospital, Rahul Gandhi was interrogated by the ED on day three. 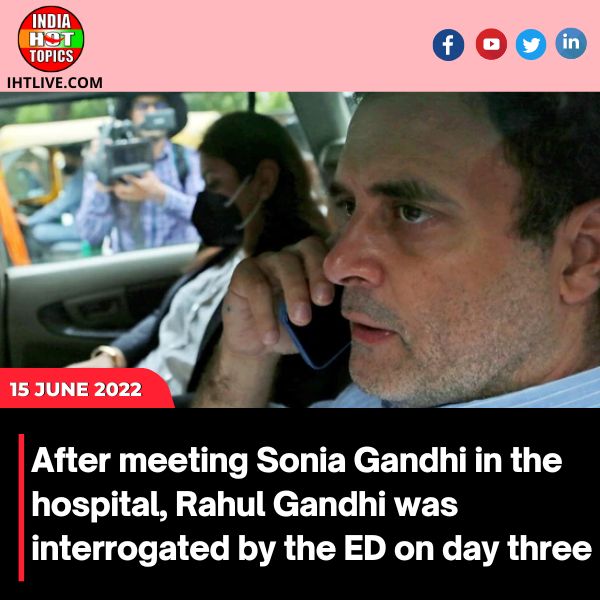 Rahul Gandhi is set to appear for the third day of questioning before the Enforcement Directorate. The Congress has been fiercely demonstrating in the national capital since Monday. Delhi Police maintained barricading and tight security near the party headquarters at Akbar Road. It is part of its ‘Satyagraha’ protest.

Rahul Gandhi was questioned for nearly eight hours by the probe agency on Tuesday. The case relates to alleged misappropriation of funds by the Gandhis in the party-backed Young Indian’s takeover of the National Herald publisher Associated Journals. P Chidambaram, KC Venugopal have been allegedly mandhandled amid stir.

Rahul Gandhi is set to appear for the third day of questioning before the Enforcement Directorate. The Congress has been fiercely demonstrating in the national capital since Monday. Delhi Police maintained barricading and tight security near the party headquarters at Akbar Road. It is part of its ‘Satyagraha’ protest.

Rahul Gandhi was questioned for nearly eight hours by the probe agency on Tuesday. The case relates to alleged misappropriation of funds by the Gandhis in the party-backed Young Indian’s takeover of the National Herald publisher Associated Journals, reports India’s Press Trust of India (PTI).

Top Congress leaders – including party spokesperson Randeep Surjewala – were detained for a second straight day on Tuesday. P Chidambaram, KC Venugopal have been allegedly mandhandled amid the stir in the party’s top leadership meeting at its headquarters in New Delhi.

Meanwhile, the Congress has not backed down from criticising the government’s announcements. The party criticised 10 lakh jobs in 1.5 years and a new military recruitment model as ‘maha jumlas’.

“Why did it take you 8 years to realize that giving Govt jobs is a possibility?” asks senior Congress leader Mallikarjun Kharge. “Delivered: the worst ever unemployment crisis,” he writes in a scathing attack on Prime Minister Narendra Modi.