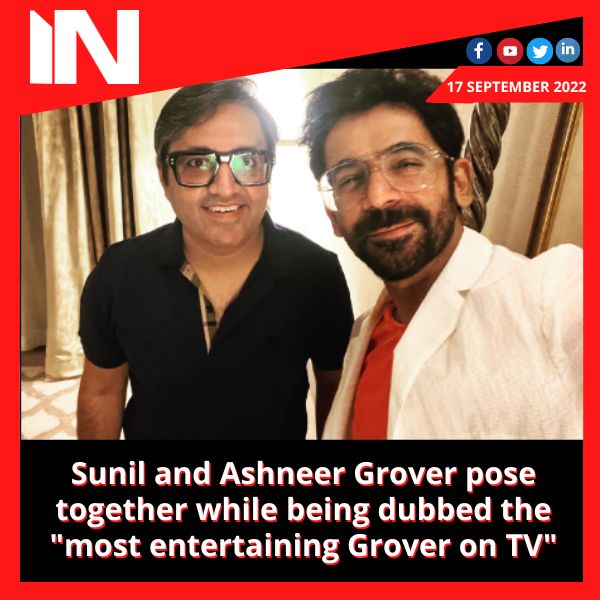 Ashneer Grover of Shark Tank India posted a picture of himself and Sunil Grover on Instagram on Saturday. As they posed for a selfie, the two are seen grinning for the camera. Ashneer’s funny description for the image, which read, “Two of the most entertaining ‘Grovers’ ever on TV?,” received a lot of responses from admirers. Ashneer participated in the popular reality series Shark Tank India as one of the seven sharks (judges and investors), while Sunil Grover is a well-known comedian from programmes like Comedy Nights With Kapil and The Kapil Sharma Show, among others.

Many concurred with the co-founder of BharatPe’s claim that the two were the most amusing “Grovers” on TV. When Ashneer Grover said, “This is hypocrisy,” in Shark Tank India, a fan made a reference to the statement and wrote, “Oh absolutely! Everyone else is deceitful, according to Baki Sab Dogle. Another of his catchphrases from the new reality programme, which has been extensively circulated on social media, was used in response by one admirer. “Bhai kya kar raha hai tu” was her remark, which means “brother, what are you doing?” Couldn’t agree more, read another remark. While everything was going on, some Ashneer fans wanted to see him back on television as a Shark Tank India judge because they missed his “savage responses.”

Peyush Bansal, Anupam Mittal, Vineeta Singh, Namita Thapar, Aman Gupta, and Ghazal Alagh were among the judges and investors on Shark Tank India in addition to Ashneer. Ashneer left BharatPe in March following accusations of money-laundering. He held the position of managing director. Ashneer and his wife Madhuri Jain Grover were later kicked off the board of the business.

In contrast, Sunil will soon be visible in the upcoming movie Goodbye. The movie, which will be released in theatres on October 7, also stars Amitabh Bachchan, Neena Gupta, Pavail Gulati, Elli AvrRam, and Sahil Mehta. It is directed by Vikas Bahl. Sunil has previously appeared in movies like Gabbar Is Back, starring Akshay Kumar, and the 2008 hit Ghajini, starring Aamir Khan.

Dhanush flaunts long hair, beard and moustache as he shares his look from Captain Miller, fans say he’s ‘killing it’