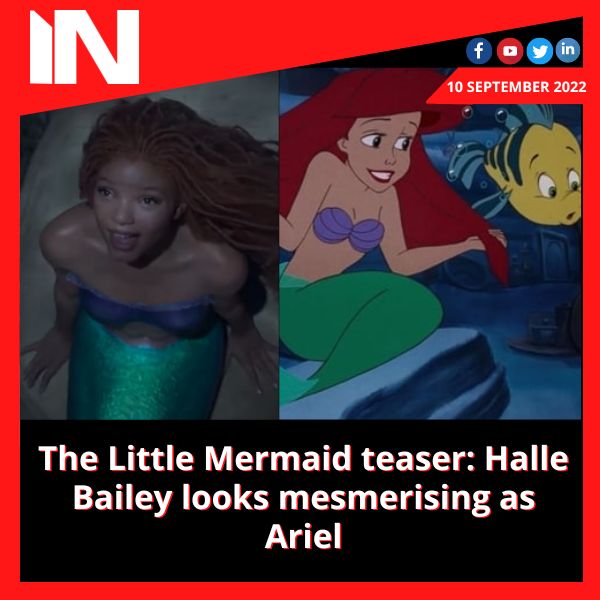 The trailer for The Little Mermaid from Disney transports you underwater. Disney debuted the first trailer for the eagerly awaited live-action version on Friday at D23 Expo. Beautiful underwater pictures of Halle Bailey’s Ariel are seen in the teaser, which also plays the well-known Part of Your World soundtrack. The song is partially sung in the teaser by Halle as well. Rob Marshall, who also directed Mary Poppins Returns, is the film’s director. The Little Mermaid will be published in May 2023, according to Disney.

Beautiful underwater wildlife is first displayed in The Little Mermaid teaser before giving viewers their first glimpse of Halle as the mermaid princess Ariel. Before catching a glimpse of the sun, she can be seen gliding effortlessly over the water. The song Part of Your World, which was in the 1989 original, is then heard from her. Then fans get their first look of Halle’s face, complete with Ariel’s recognisable red hair.

Ariel will be played by Halle Bailey, and Prince Eric will be played by Jonah Hauer-King. The cast also features Noma Dumezweni in an unspecified role, Awkwafina as Scuttle, Jacob Tremblay as Flounder, Javier Bardem as King Triton, and Melissa McCarthy as Ursula.

Halle said during a red carpet interview at the 2022 Oscars in March that she will perform Part of Your World in the new film. In a recent interview with Variety, Halle also talked about her experience filming the movie. She had stated, “That reinforcement was something that I needed. I want the little girl in me and the little girls just like me who are watching to know that they’re wonderful, that they should be a princess in every single aspect. There’s no reason that they shouldn’t be.

Halle also talked about growing up and relating to Ariel in the Variety interview, adding, “Her feeling of longing, her searching for herself, was something that I could empathise with.

In July 2019, it was revealed that Halle Bailey, an actor and singer who is a member of the singing duo Chloe x Halle, would be portraying the title role in the 2016 animated film The Little Mermaid. After the Covid-19 pandemic caused production delays, shooting finally began in early 2021 and ended in July.

According to Jimmy Kimmel, Andrew Garfield became a real-life Spider-Man to save him

Chris Pine was not spit on by Harry Styles, according to the actor’s representative