Connect with us
Related Topics:
Up Next

Thunderstorms in Delhi-NCR cause significant temperature drops; air and road traffic are disrupted 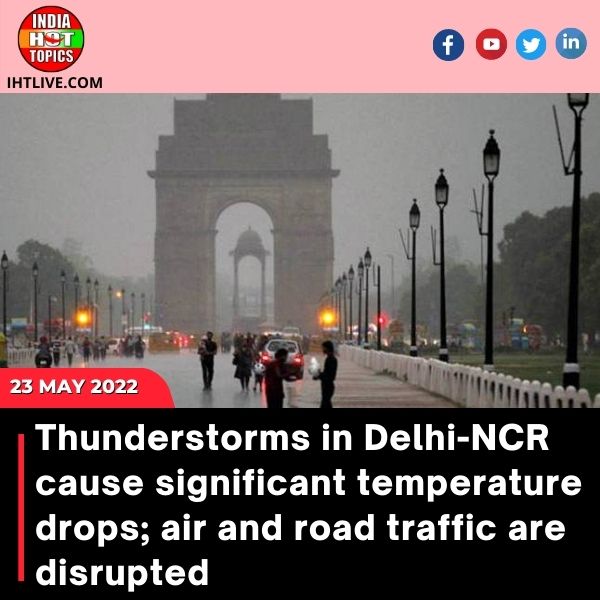 Huge thunderstorms and heavy rains pounded Delhi-NCR on Monday morning, causing a temperature drop of over 11 degrees in less than 1.5 hours and disrupting air and road traffic. Waterlogging and blackouts were reported in several parts of the National Capital Region. At Delhi’s Indira Gandhi International Airport, around 100 flights were reported to be delayed, with 19 flights being diverted.

1. Heavy rain on Monday morning brings welcome relief to the national capital and nearby cities after the city set a new record with a day’s high of 49 degrees in Mungeshpur, near the Haryana border, last week.

2. In some parts of the national capital, roads were blocked by falling trees, and traffic was clogged during morning rush hour. Traffic jams were also reported in Gurugram.

3. Air traffic was disrupted as well. “Flight operations at @DelhiAirport are affected due to bad weather,” the Delhi International Airport Limited had tweeted earlier. Passengers should contact the airline directly for the most up-to-date flight information. #Rain #BadWeather (sic)”.

4. According to the Delhi airport’s website, bad weather and other issues caused over 40 departure flights to be delayed. Around 18 arrival flights were also delayed, with two flights being cancelled, according to the news agency ANI.

5. Between 5:40 and 7 a.m. on Monday, the temperature dropped 11 degrees Celsius. On Monday, Mahesh Palawat, vice president of private weather agency Skymet, tweeted that the national capital set a new record: “Delhi recorded 17.2 degree minimum temperature today on May 23.” May saw its lowest level in a decade. On May 2nd, 1982 (sic), a temperature of 15.2 degrees was set.

6. During thunderstorms, the IMD (India Meteorological Department) predicted wind speeds of 60 to 90 km/h.

10. Following a period of extreme heat, people on social media applauded the change in weather.