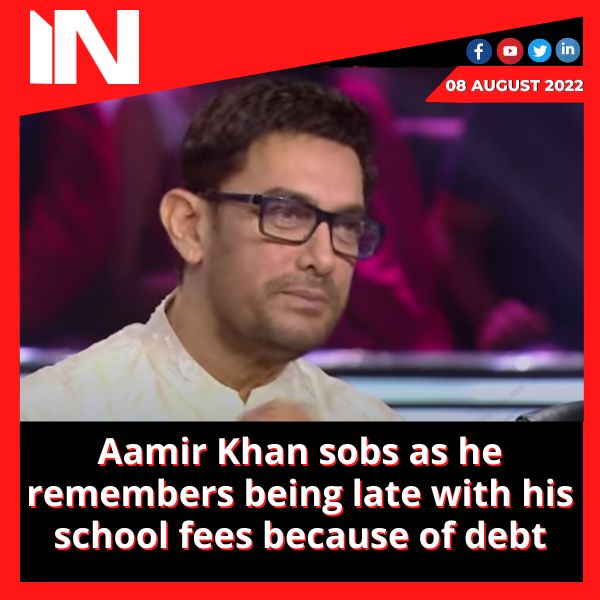 The actor Aamir Khan broke down as he talked about his early years, when his family was in debt and he struggled in school. Aamir discussed how he and his siblings would frequently be late with their school fees in a recent interview. He further stated that after issuing them one or two warnings, the principal would read their names during the school assembly.

The film producer Tahir Hussain and his wife Zeenat Hussain are the parents of Aamir. He is the oldest of his three older brothers, Nikhat Khan and Farhat Khan. Aamir appeared as a child actor in Yaadon Ki Baaraat (1973). (1973). His first leading role as an adult was in Qayamat Se Qayamat Tak (1988), costarring Juhi Chawla. Aamir was only ever directed by Tahir in his film Tum Mere Ho in 1990.

Aamir discussed his early years, during which his family went through a difficult period lasting eight years and was in debt, in an interview with Humans of Bombay. The cost of attending school back then was $6 for the sixth standard, $7 for the seventh standard, $8 for the eighth standard, and so on. Aamir and his siblings, however, “were always late to pay their fees.” The principal would call their names during assembly in front of the entire school after one or two warnings. Aamir spoke to the audience while “tears were in his eyes.”

Aamir’s first movie in four years, Laal Singh Chaddha, will be his next appearance for fans. Laal Singh Chaddha, directed by Advait Chandan, is the authorised Hindi remake of the 1994 Academy Award-winning movie Forrest Gump, which starred Tom Hanks. Kareena Kapoor, Mona Singh, and Naga Chaitanya are also featured in the movie.