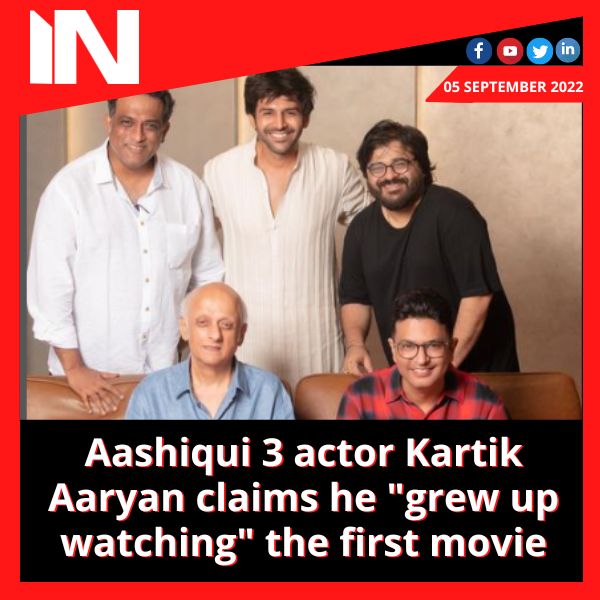 The lead character in Aashiqui 3 is actor Kartik Aaryan, who grew up watching “the timeless classic Aashiqui.” Anurag Basu will helm the third instalment of the popular Aashiqui franchise. The name of the female actor is still a mystery. Kartik also referred to himself as “a big fan” of Anurag in a recent interview.

Mahesh Bhatt directed Aashiqui (1990), which was supported by T-Series and Vishesh Films. The lead actors were Anu Aggarwal and Rahul Roy. Aashiqui 2, which was directed by Mohit Suri and starred Shraddha Kapoor and Aditya Roy Kapur, brought the franchise back to life in 2013. It was also profitable at the box office.

The timeless original Aashiqui is something I grew up watching, and working on Aashiqui 3 is like a dream come true, Kartik remarked in an interview with Variety. I’m honoured and thankful to have the chance to work with Bhushan Kumar and Mukesh Bhatt on this project. I’ve always admired Anurag Basu’s work, and working with him on this project will undoubtedly mould me in many ways.

Anurag also discussed the future project, saying, “The goal is to take the legacy forward in the greatest way possible. Aashiqui and Aashiqui 2 were feelings for the fans that have lingered in hearts to this day. It would be my first collaboration with Kartik Aaryan, who is renowned for his tenacity, grit, and commitment to his job.

Fans last saw Kartik in the box office success Bhool Bhulaiyaa 2, which brought in over 200 crores. The movie, which also has Tabu and Kiara Advani in the main parts, is directed by Anees Bazmee. He will next be seen with Kriti Sanon in Rohit Dhawan’s Shehzada, set for release on February 10, 2023.

In addition, he will star alongside Kiara Advani in Sajid Nadiadwala’s Satyaprem Ki Katha, which will be released on June 29, 2023. Additionally, Kartik will appear in Freddy alongside Alaya F. The movie, which Ekta Kapoor produced, is billed as a romantic thriller. Additionally, he is developing Captain India by Hansal Mehta.

Kartik and Kiara began shooting for Satyaprem Ki Katha last week. Kartik posted a picture of himself on Instagram with the caption, “Shubhaarambh #SatyapremKiKatha Ganpati Bappa Moriya.” The director of the film is Sameer Vidwans.

Samara, Rishi Kapoor’s granddaughter, posts an old photo in honour of his birthday. The best nana

Ranveer Singh danced with girls at Jayeshbhai Jordaar event, nobody knew it was about female foeticide: Vivek Agnihotri