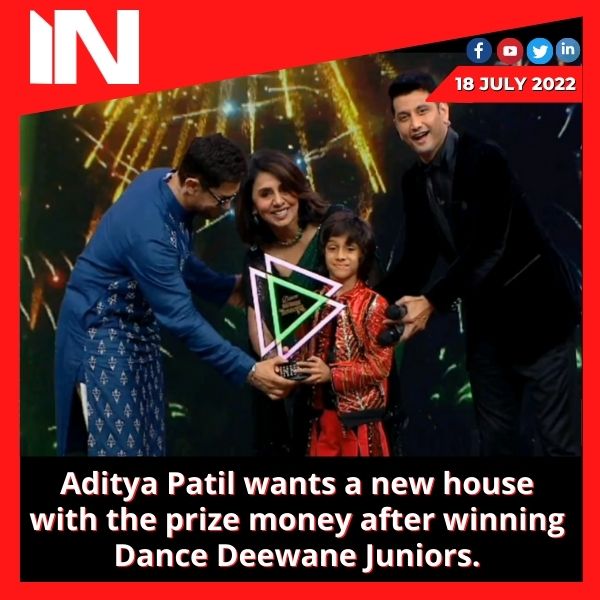 Aditya Patil, 8, won Dance Deewane Juniors, a dance reality competition. With the winning money of Rs. 20 lakh, he plans to build a new home.
Aditya Patil, 8, and his choreographer Pratik Utekar are the winners of the Dance Deewane Juniors talent competition. During the finals broadcast, which also featured Aamir Khan as a special guest, he lifted the winners trophy and collected the prize money of 20 lakh. He wants to give his grandfather the prize money so they can build a new home.

Actresses Neetu Singh, Nora Fatehi, and choreographer Marzi Pestonji served as judges for Dance Deewane Juniors, which was presented by Karan Kundra. Aditya posted a photo of himself holding the award on Instagram with the caption “Dream Completed. The entire family and my @pratikutekar.official sir deserve all the praise.

Following his victory, Aditya also congratulated everyone, including his choreographer. Aditya posted a couple images from the finale and said, “Finally the trophyyy is here. I can’t even begin to convey how much my family and I appreciate everyone’s unending love and support. The effort put forward by my family, my supergurus, my mentors, and everyone else. Special thanks to @pratikutekar.official sir for helping me win this; it would not have been possible without his direction and mentorship. He helped me try new dance styles each week and made sure I was successful. As a result of him and his team, my dancing has only improved.

Aditya honoured his grandfather with his victory. He stated to ETimes, “I dedicate this trophy to my grandfather because it was his hope to see me win the show. He is very happy.” He stated, “I will give the winning sum to my grandfather and we will build a big house,” when asked how he planned to use the cash.

Fans comment that Shah Rukh Khan is as attractive as ever after being spotted in plaid in leaked photos from the London sets of Dunki.