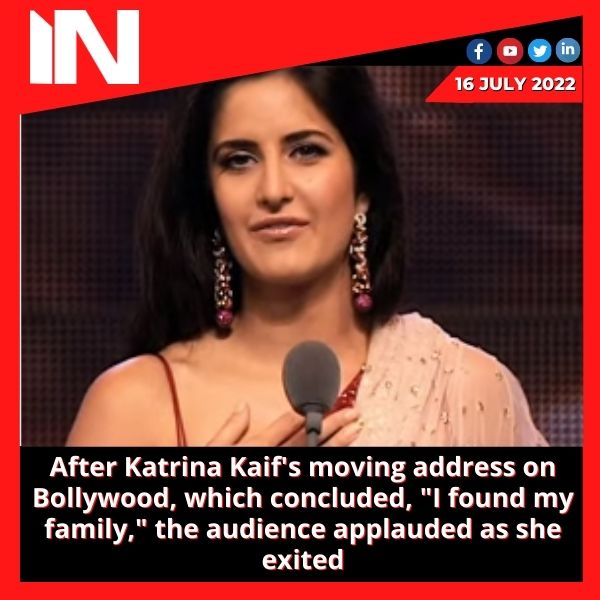 Once, Katrina Kaif gave a passionate speech about her love for the film industry that left the crowd applauding and cheering for her. With the release of the 2003 film Boom, Katrina made her Bollywood debut; yet, it took her two years and three films before she achieved commercial success. In the 2005 movie Maine Pyaar Kyun Kiya, in which she co-starred with Salman Khan, Sohail Khan, Arshad Warsi, and Sushmita Sen, Katrina gained fame and fortune. A string of commercial successes followed.

Next year, Katrina, who turns 39 on Saturday, July 16, will have worked in the film industry for 20 years. The performer thanked Bollywood for welcoming her and providing her with a platform when she made an appearance at the Zee Cine Awards ceremony in 2008.

Katrina received the Special Zee Cine Award For British Indian Star Of The Year at the London ceremony. Katrina thanked the movie business and her followers for helping her realise her aspirations after mentioning her mother and sisters, who were watching from the audience.

My father is from India, and my mother is from London, she remarked. So it combines the best of both worlds. But this sector has, in my opinion, been the most warmly accepting. I discovered my kinship and my calling in life. I located my house. To me, this industry is everything. I sincerely appreciate your love and support.

Everyone who is present this evening and everyone who has seen my movie and made them successful. Thank you so much, and I hope that tonight will be the fulfilment of all of your aspirations as well as mine.”

2015’s Atika Farooqui interview was one of several times Katrina had discussed settling in India. She stated: “I’ve had a great experience so far. My journey here has been incredible, in my opinion. I got more than I bargained for, and I believe that through moving here, I was able to find my calling in life. As someone who must constantly move and change, when I arrived here, I believe I discovered my home and became anchored.

It’s amazing how much support and acceptance I’ve had from the business.

Next up for Katrina is the October 7 theatrical premiere of the horror-comedy Phone Bhoot, which also stars Siddhant Chaturvedi and Ishaan Khatter. Alongside Salman Khan, she will appear in the third chapter of Kabir Khan’s Tiger film series. She also has the upcoming film Merry Christmas with Vijay Sethupathi.