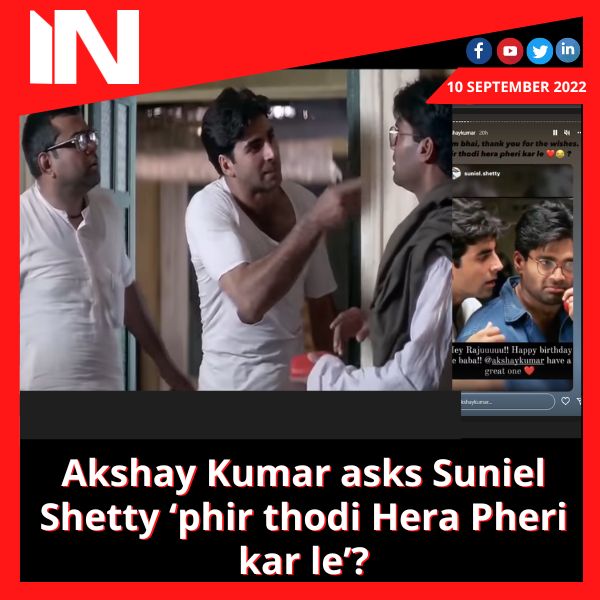 When asking Suniel Shetty if he was interested in doing some “hera pheri” on his birthday, Akshay Kumar dropped a hint about the eagerly anticipated Hera Pheri sequel. In the manner of their other co-star Paresh Rawal, who portrayed Baburao in Hera Pheri, Suniel wished Akshay a happy 55th birthday.

Suniel Shetty wished Akshay Kumar a happy birthday on his Instagram Stories by posting a photo of the two of them together when they were younger and writing, “Hey Rajuuuu! Happy birthday re baba. Have a great one. @akshaykumar have a great one.” Akshay replied, “Shyam bhai, thank you for the wishes. In what ways does hera pheri work? along with a laughing and loving emoji.

Hera Pheri, a 2000 Bollywood comedy film directed by Priyadarshan, is regarded as one of the best comedies of all time and has garnered cult status over time. Tabu, Asrani, Om Puri, and Kulbhushan Kharbanda were featured as well. The 2006 sequel Phir Hera Pheri included a trio of actors—Akshay as Raju, Suniel as Shyam, and Paresh as Baburao—as well as new cast members Bipasha Basu, Rimi Sen, Johnny Lever, and Rajpal Yadav.

There have been rumours about the movie’s renewal for the third Hera Pheri series sequel for a number of years now, but a confirmation is still pending. The film has its own devoted following and served as the idea for a number of well-known memes, including those that of Paresh Rawal.

Akshay Kumar’s OTT movie, Cuttputlli, has came out. The actor plays a cop in the murder mystery. After Raksha Bandhan, Samrat Prithviraj, and Bachchhan Paandey, it is his fourth release of the year. None of the three theatrical releases, however, was able to achieve the anticipated box office receipts. This year, Ram Setu, another film starring Akshay, will be released around Diwali.

Anisha Padukone, Ranveer Singh’s sister-in-law, makes a joke while he cries on stage