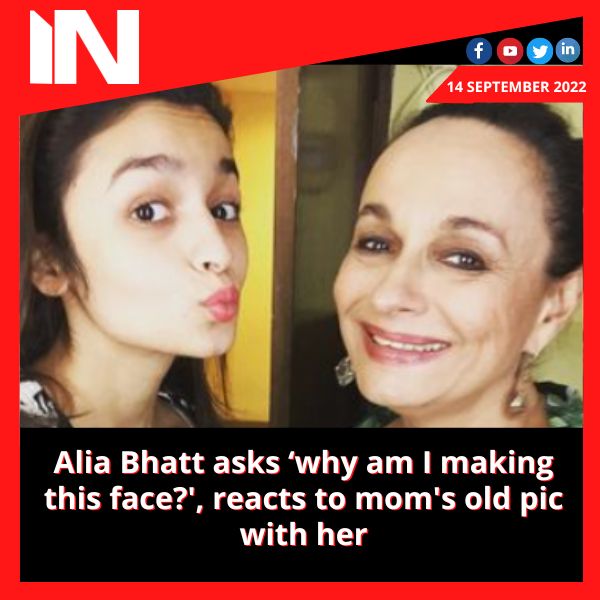 Actress Alia Bhatt responded to her mother, actor Soni Razdan, who recently shared a photo of herself making a “strange” face. Soni posted their picture, which was taken seven years ago, on Instagram. Soni grinned while Alia pouted in the selfie. Soni chose a green dress, while Alia opted for a black and white ensemble.

“On this day 7 years ago… when you came and attended my play ‘Where Did I Leave my Purdah’, and we took this humorous picture in my dressing room. I remember it like it was only possibly a year or two ago… how can time fly so fast,” Soni Razan wrote as the description for the photo.

Soni replied to Alia’s comment on the post, “@aliaabhatt Haha we were just fooling around I guess (smiling face and face with stuck-out tongue emojis),” with the caption, “Why am I making this strange face (laughing face emoji).” Actor Lillete Dubey added, “Cute! We have to do a play together again soon Soni!” She replied, “@lilletedubeyofficial Absolutely

Soni frequently shares Instagram photos of Alia. She had posted a selfie in August with Shaheen Bhatt, Alia, and herself. Throwback! Thrown up by my phone this morning, reminding me that we need to do this again soon. Have a girls’ night out, that is (dancing emoji), she wrote in the description.

Alia was last viewed by fans in Ayan Mukherji’s Brahmastra. Ranbir Kapoor, Amitabh Bachchan, Mouni Roy, and Nagarjuna also appear in the movie. On September 9, it was released in Hindi, Tamil, Telugu, Malayalam, and Kannada. Alongside Gal Gadot and Jamie Dornan, she will also make her Hollywood debut in the Netflix movie Heart of Stone.

Along with Dharmendra, Jaya Bachchan, Shabana Azmi, Ranveer Singh, and Jaya Devgan, Alia will appear in Karan Johar’s upcoming film, Rocky aur Rani Ki Prem Kahani. The movie is expected to be released in theatres in February next year. She also has Farhan Akhtar’s Jee Le Zaraa with Priyanka Chopra and Katrina Kaif.

A fan claims that Ranjeet, who recently turned 81, looks 30 years younger in a video he shared