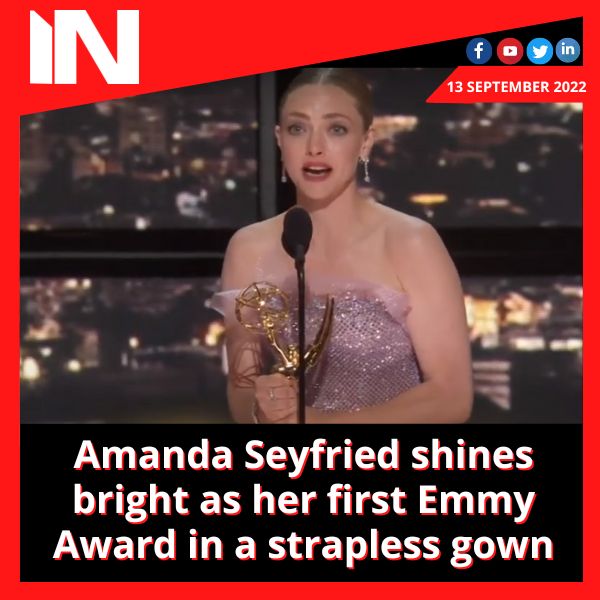 Amanda Seyfried won her first-ever Emmy Award as the lead actress in a limited or anthology series on a memorable night at the 2022 Primetime Emmy Awards. The actress won the award for her subtle depiction of Elizabeth Holmes in The Dropout, a popular series on Hulu. Aside from her significant victory at the awards ceremony, Amanda’s stunning appearance for the event was the talk of the town. She shone as brightly as her golden Primetime Emmy Award while donning a stunning lavender figure-hugging gown adorned in crystals.

Amanda Seyfried arrived at the Microsoft Theater in Los Angeles on Tuesday (IST) to watch the Primetime Emmy Awards 2022. In the category of lead actress in a limited series or motion picture for The Dropout, the actor received her first Emmy Award at the glamorous ceremony. As fans celebrated the victory, the news started to spread online. Amanda selected a floor-length Armani Privé gown embellished with priceless gems for the important event. Look at the images below.

Amanda’s strapless Armani Privé gown has a floor-grazing hem length, a body-hugging form, rhinestone accents, mesh overlay, and a see-through tulle structural element on the neckline. She accessorised the elegant look with sparkling Cartier drop earrings, a diamond bracelet, rings, and a sleek bun with a centre part. The final glam options were rich fuchsia lips, smoky eyes, a bit of mascara on the lashes, and radiant skin.

Amanda praised the designer as she made her way down the red carpet and discussed her outfit in an interview with E! News. The actress informed the portal that “Tonight, I’m a mermaid! They are the only ones who truly know me—Armani Privé.”

How could you not love people paying attention to you and with positive feedback – it’s the best. I mean, you don’t do it for that, but when you get it, it’s the cherry on top of a really great job. Amanda also opened up about her nomination. “This is my first foray into TV since I was young, so this feels like – this recognition’s like next level,” she said.

Sunny Leone’s bikini diaries in Maldives with sand and sea

Harnaaz Sandhu starts her day with ‘the iconic Serena Williams’