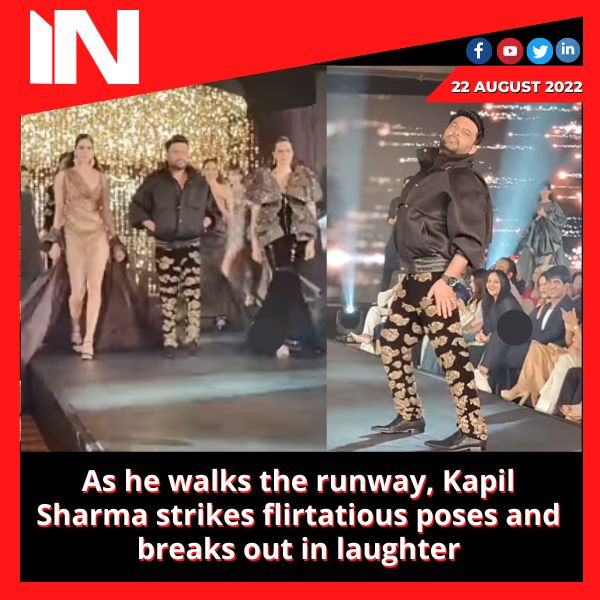 Kapil Sharma, a comedian, recently performed as the star of Anu Ranjan’s The Beti Fashion Show. Many paparazzi accounts posted videos of Kapil going on the ramp for the first time on Instagram. Kapil wore a black jacket, black and golden pants, and shoes for the occasion.

A video showed Kapil greeting the audience as he was on the ramp. On the ramp, he also struck several sexy positions before turning around and giggling. Along with the other models, Kapil too walked the runway and struck a photogenic posture.

Speaking at the occasion in another video, Kapil reflected on his youth and said, “My father would start by massaging my sister’s feet before waking her up for school. With us, though, dad would simply pull us up without even noticing which side of the blanket our faces were hidden. But after becoming a father, I can empathise more now. My wife, who is someone else’s daughter, first entered my life, and then I was fortunate to have a lovely daughter named Anayra. This is the first ramp I’ve ever walked; up until now, I’ve only done so on the streets.”

Anu Ranjan is the mother of actress Anushka Ranjan, who attended the performance alongside her actor husband Aditya Seal. Aside from them, other famous people that attended the event included Satish Shah, Poonam Dhillon, Gulshan Grover, Pooja Batra, Sussanne Khan, and Arslan Goni.

The next time fans will see Kapil is in the upcoming season of his hit programme The Kapil Sharma Show. He just gave his fans a sneak preview of his show revamp. On Sunday, Kapil posted a photo on Instagram showing off his appearance. He was wearing a black T-shirt, black slacks, and a white coat when the photo was taken. He finished off his ensemble with black sneakers and sunglasses. He captioned the photo, “New season, new look #tkss #comingsoon.”

Additionally, Kapil will appear in the Nandita Das-written and -directed film Zwigato. Shahana Goswani also appears in the movie. In December 2018, Kapil and Ginni Chatrath got married in Punjab. Trishaan Sharma, their son, was born in 2021, and Anayra was welcomed in 2019.

Raju Srivastava, who had grown frail, cautioned him to be careful: Suman Shekhar