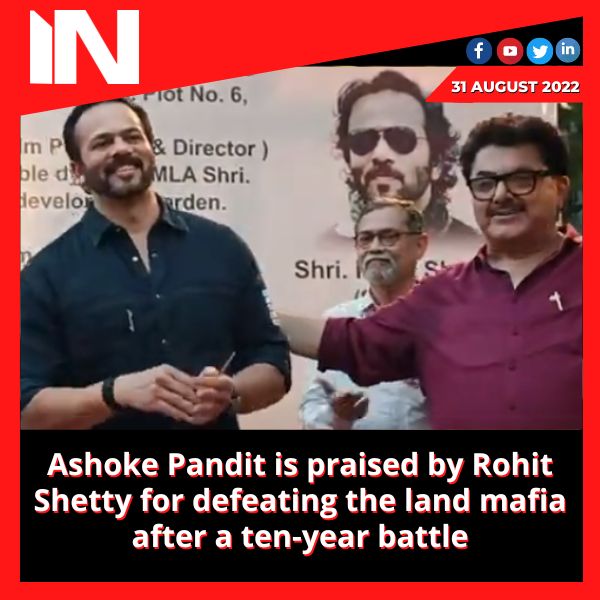 In Juhu Scheme, Mumbai, filmmaker Rohit Shetty dedicated a garden. He also commended filmmaker and FWICE member Ashoke Pandit for his ten-year battle against an alleged land mafia to reclaim the area for the people. In Juhu, Rohit also resides.

Ashoke Pandit discussed the land in a video he posted on Twitter before the ceremony. He claimed that land had been illegally taken by builders, and that it had taken local residents and campaigners ten years to fight to reclaim it. He added that we didn’t permit structures like the Twin Towers in Noida to be built just to be dismantled afterwards.

He posted the clip and stated, “Juhu’s residents are now celebrating their triumph over the land mafia. After more than ten years of conflict, we managed to turn the area into a lovely garden. It is a project of our energetic MLA @AmeetSatam Ji, and Rohit Shetty, a director, will inaugurate it.”

Rohit congratulated everybody there for aiding Ashoke in the struggle and remarked, “It was your battle, and Ashoke Pandit was the leader. I’m only here to stand behind you all. I’m pleased with what you all have accomplished thanks to your tenacity “.

At the ceremony, Ashoke also made a statement about how difficult it was to resist such land sharks. “We are grateful to the director Rohit Shetty for launching the community garden in Juhu Scheme, where he also resides. The result of the citizens’ struggle against the land mafia is the garden. For ten years, the locals campaigned to restore the garden. The stunning garden, which was paid for by our vivacious BJP MLA Ameet Satam, put an end to this conflict “.

Added he, “It’s a dream come true for the locals who toiled tirelessly to save this vast open area, a public garden that was really swallowed up by the construction crew to build a skyscraper. It’s a great day for the regular man, so I’m really grateful that the media came out to cover the event today.” BJP Corporators Sudha Singh and Rohan Rathod, as well as architect PK Das, all attended the official celebration.

In 2017, Ashoke Pandit and a few others in the vicinity are said to have taken on the state government and municipal corporation and successfully reclaimed the land for usage as an open space.