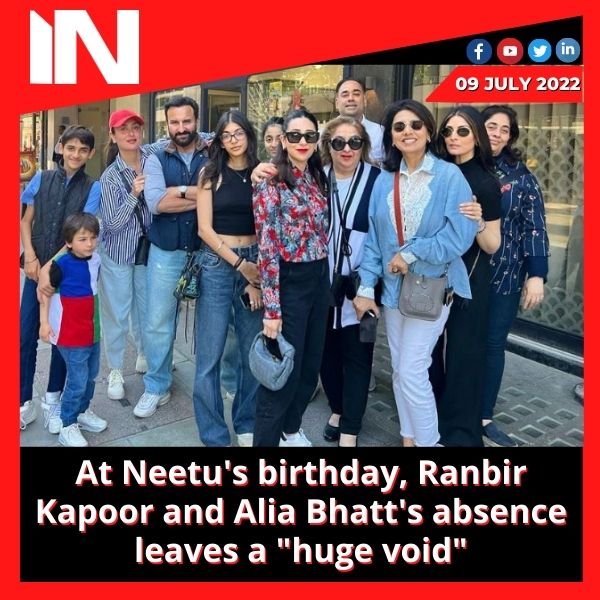 Friday was Neetu Kapoor’s birthday, which she spent with her family. Her son Ranbir Kapoor and daughter-in-law Alia Bhatt, however, were unable to attend due to business commitments. Riddhima Kapoor Sahni, Neetu’s daughter, mentioned that Ranbir and Alia were absent from the celebrations as she posted images from them.

On her Instagram Stories, Riddhima posted a photo of her hugging Neetu from behind as her daughter Samara Sahni stood to the side. On the table in front of Neetu, a cake was placed. “Major missing,” Riddhima wrote as the post’s caption, adding the hashtags Neetu and Alia as well as RK for her brother Ranbir Kapoor. She included a heart emoji in pink.

Along with posting a photo of herself and her cousins Karisma Kapoor, Kareena Kapoor, and Natasha Nanda, Riddhima also captioned the image, “Sisters.” In another image, Neetu Kapoor, who was celebrating her birthday, was pictured with the four sisters. She also posted a photo of the complete family gathering around Neetu as she cut her cake, including her husband Bharat Sahni, Saif Ali Khan, and Taimur Ali Khan. She added a red heart emoji with the caption “Fam”.

More images from Neetu’s birthday celebrations were also shared by Karisma Kapoor, along with a video in which guests sung “happy birthday” as a cake with lit candles was presented to Neetu.

The Kapoor family had travelled separately and landed in London on different days. When Neetu arrived, Alia Bhatt had already left London to begin filming her Hollywood debut, Heart of Stone, and was in Portugal.

Alia, who is also expecting her first child with Ranbir Kapoor, has completed Heart of Stone filming and announced on Instagram that she will be returning to her own country. Ranbir has been quite active in the marketing of his movie Shamshera, which will hit theatres on July 22.

Advertisement
Related Topics:absencealiabhattbirthdayHugeleavesneeturanbirkapoor
Up Next

After Katrina Kaif gave him a hint, Vicky Kaushal displays his beard