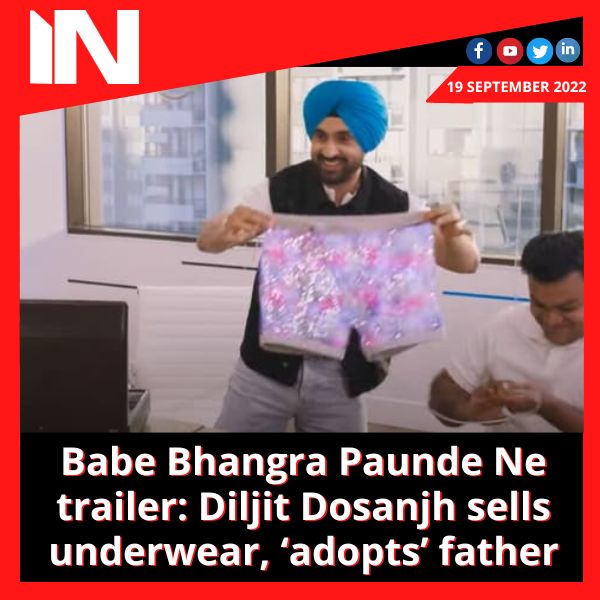 Diljit Dosanjh, whose most recent movie, Jogi, debuted on Netflix on September 16, is getting ready to star alongside Sargun Mehta in his upcoming Punjabi film, Babe Bhangra Paunde Ne. The next comedy’s humorous trailer was posted by the actor and the production team on Tuesday. Diljit will do anything to become the next “three richest men in the world,” even selling “galaxy” underwear and “adopting” a parent in order to receive insurance benefits.

The first scene of the three-minute Babe Bhangra Paunde Ne video features NRI Diljit Dosanjh riding a bicycle while listening to music with headphones. Then he can be seen speaking to his friends in Punjabi about the “three richest persons in the world.” “How did Bill Gates, Elon Musk, and Jeff Bezos become the richest men in the world? just because of a thought. He informs them, “We have an idea as well. Then, as they unload supplies from a truck at a grocery shop, he asks the same buddies, “Who are the three richest men in the world in the future? Our trio! As the three of them unite in their preparation for the future, Diljit exclaims, “Come on, baby.”

Then they reveal their first business plan: Lyra galaxy underpants. Diljit is seen presenting his company plan to an enthusiastic group of investors before one of them informs him that “Your ideas are not ready at all.” Diljit and his friends devise another strategy to realise their aspirations of wealth: they “adopt” a parent and launch their firm after his passing using the proceeds from an insurance policy. They must now eliminate a father “whose validity is less.”

Here comes Sargun Mehta. She unintentionally contributes to Diljit’s scheme by supplying information about the health of her patients while working at an old age home. Soon after, Diljit welcomes a “father” home and gives Sargun a hug in appreciation for helping “an orphan” locate his “papaji (dad)”. Prior to the insurance policy going into effect in about 25 days, Diljit must make sure his “father” does not pass away. “So now that this thing is cut to cut,” Diljit says to his insurance agent. It’s a race against the clock.

Despite the fact that “he fell ill as soon as he came” to live with them, Diljit and his buddies do their best to keep his “papaji” alive for the following “25 days.” To the surprise of Diljit and his pals, Diljit’s “father” notices a marked improvement in his health, thus it does not appear that everything is going as planned.

On Monday, Diljit announced the movie’s release date on social media. “Babe Bhangra Paunde Ne… Releasing worldwide – this Dussehra 5th October,” he stated in a post sharing a flyer. Babe Bhangra Paunde Ne, which will be Diljit’s first collaboration with Sargun, is being directed by Amarjit Singh Saron.

Akshay Kumar takes Nitara to an amusement park. Here’s why he feels like a hero

Nick Jonas celebrated his opulent 30th birthday, and Priyanka Chopra has shared all the photos.