Laxmikant Shantaram Kudalkar was born on the day of Laxmi Pujan, Dipawali on 3 November 1937. Probably, because of the day of his birth, his parents named him Laxmikant, after the goddess Laxmi. He spent his childhood amidst dire poverty in the slums of Vile Parle (East) in Mumbai. His father died when he was a child. Because of the poor financial condition of the family he could not complete his academic education either. Laxmikant’s father’s friend, a musician himself, advised Laxmikant and his elder brother to learn music. Accordingly, Laxmikant learned to play the mandolin and his elder brother learned to play the tabla. He spent two years in the company of the well-known mandolin player Hussain Ali. He began organising and performing in Indian Classical instrumental music concerts to earn some money. Later, in the 1940s, he also learned mandolin from Bal Mukund Indorker and violin from Husnalal (of the Husanlal Bhagatram fame). Laxmikant began his film career as a child actor in the films Bhakt Pundalik (1949) and Aankhen (1950). He also acted in some Gujarati films.

Pyarelal Ramprasad Sharma (born 3 September 1940) is the son of a renowned trumpeter Pandit Ramprasad Sharma (popularly known as Babaji), who taught him the basics of music. He started learning violin at the age of 8 and practised it 8 to 12 hours daily. He learnt to play violin from a Goan musician named Anthony Gonsalves. The song “My Name Is Anthony Gonsalves” from the movie Amar Akbar Anthony is regarded as a tribute to Mr. Gonsalves (the movie had music by Laxmikant–Pyarelal). By the age of 12, his family’s financial condition had deteriorated, which in turn forced him to earn money by playing in studios. Pyarelal then used to frequent and play the violin in studios such as Ranjit Studios, to earn money for his family. Pyarelal’s real life brother Gorakh Sharma played guitar for various songs composed by the duo Lakshmikant Pyarelal.

In an interview with Annu Kapoor recently, he has mentioned that he was quite an adept violinist and expert in western form of music. Pyarelal even thought to try his fortune in the West and wanted to become a regular orchestra player with a renowned group. Lakshmikant dissuaded him and then they started the amazing journey of music for Indian cinema.

When Laxmikant was about 10 years old, he once played mandolin in a Lata Mangeshkar concert in Radio Club, Colaba. Lata was so impressed that she talked to him after the concert.

Laxmikant and Pyarelal met at Sureel Kala Kendra, a music academy for children, run by the Mangeshkar family. After she came to know about their financially poor backgrounds, Lata recommended their names to music directors like Naushad, Sachin Dev Burman and C. Ramchandra. Similar financial backgrounds and age made Laxmikant and Pyarelal very good friends. They used to spend long hours at the recording studios, sometimes getting work for each other and even playing together whenever they got the opportunity.

Pyarelal often used to frequent the Bombay Chamber Orchestra and the Paranjoti Academy, where he would perfect his skills in the company of Goody Seervai, Coomi Wadia, Mehli Mehta and his son, Zubin Mehta. Laxmikant–Pyarelal were not content with the payments being made to them for their music, so they decided to go to Madras (now Chennai). But, it was the same story there. So, they returned. Once Pyarelal decided to leave India and go to Vienna to play for symphony orchestras, just like Zubin. However, he stayed back at Laxmikant’s insistence. Some of Laxmikant–Pyarelal’s colleagues at this time included Pandit Shivkumar Sharma (Santoor) and Pandit Hariprasad Chaurasia (flute). Later, Shivkumar and Hariprasad also ventured into Hindi Cinema as Shiv-Hari. Laxmikant–Pyarelal worked with almost all well-reputed music directors (with the exception of O. P. Nayyar and Shankar–Jaikishan though Laxmikant used to play mandolin in Shankar Jaikishan songs) of the 1950s. In 1953, they became assistants to Kalyanji-Anandji and worked with them as assistants till 1963. They worked as music arrangers for many music directors including Sachin Dev Burman (in Ziddi) and also for his son Rahul Dev Burman (in his first film Chhote Nawab). Laxmikant–Pyarelal and R D Burman remained very good friends, even when Laxmikant–Pyarelal started giving music independently. R D Burman played mouth organ for the two of songs of Dosti. Laxmikant once made a guest appearance playing himself as a composer of the Song “Dil Ki Baat” in Teri Kasam (1982), which had music by R D Burman.

In their early days, Laxmikant–Pyarelal’s music was very similar to Shankar–Jaikishan’s music, as Laxmikant was a great fan of theirs. Once Shankar even changed his orchestration to make sure that his music did not sound like Laxmikant–Pyarelal’s. Laxmikant–Pyarelal’s first film as music directors was not released. The first released movie which featured them as music directors was Babubhai Mistry’s Parasmani (1963), which was a costume drama. All the songs of the film became immensely popular, esp. “Hansta Hua Nurani Chehara”, “Wo Jab Yaad Aaye” and “Mere Dil Main Halki Si”. Throughout their tenure as music directors, Laxmikant–Pyarelal only used A-grade singers. Their mentors, Lata Mangeshkar and Mohammad Rafi agreed to sing for them in spite of low budgets, and Laxmikant–Pyarelal always remained indebted to them. In fact, all three, Lata, Mohammad Rafi and Asha Bhosle have sung the highest number of songs in their career for Laxmikant–Pyarelal. They continued to give patronage to Mohammed Rafi, sometimes against filmmakers’ wishes. They had a great rapport with Kishore Kumar as well. Kishore Kumar sang the most songs (402) for L-P among all male singers, followed by Rafi (about 388 songs).

Laxmikant–Pyarelal hit the big time with Rajshri Productions’ 1964 film Dosti. The film had two newcomer heroes who never became popular, and the film was a success due to its music. Songs like “Chahoonga Main Tujhe Shaam Savere” and “Rahi Manwa” became very popular. At that time, many used to think that there was a single person by the name of Laxmikant Pyarelal. Laxmikant–Pyarelal won their first Filmfare Best Music Director Award for the movie, ahead of stalwarts like Shankar–Jaikishan (for Sangam) and Madan Mohan (for Woh Kaun Thi?). Then came Lootera, a superhit musical non-star cast film, which is remembered only because of Lata Manageshkar’s superhit songs with Laxmikant–Pyarelal.

In 1967, L-P consolidated their position in the Hindi film industry with a series of hits, one after another. Non star cast film Farz was L-P’s first golden jubilee musical hit, followed by big star cast films such as Anita, Shagird, yet another Golden Jubilee hit, Patthar Ke Sanam, Night in London, Jaal and another evergreen musical hit Milan. L-P received their second Filmfare Trophy for Milan without any stiff competition.

Actor Rajesh Khanna kept Laxmikant–Pyarelal as music director for 26 of his films.

Another great collaboration was with Asha Bhonsle. She has sung many hits under their baton. “Dhal Gaya Din” (with Rafi) in Humjoli (1970) became a superhit. “Roz Roz Rozy” from Khilona (1970), “Bane Bade Raja” from Abhinetri (1970), “Hungama Ho Gaya” and “Balma Hamar Motorcar Leke Aayo” from Anhonee (1974), “Aye Mere Nanhe Gulfam” from Jagriti (1977), “Aaiye Shauk Se Kahiye” from Parvarish (1977), “Teri Rab Ne” from Suhaag (1979), “Ek Hasina Thi” from Karz (1980), “Are Bhaago Are Dauro” from Bandish (1980), “Man Kyun Behka Re” from Utsav (1985), “Balram Ne Bahut Samjhaya” from Ram Balram (1990) etc. They recorded the second most songs with Asha Bhosle. In the years 1980–1986, most of their songs would be sung by Asha only. “Hungama Ho Gaya” from Anhonee was a chartbuster and Asha was nominated for a Filmfare Award in 1974. The song was later re-recorded for the 2014 film Queen, with additional voice by Arijit Singh, it again hit the top charts and became a superhit. “Man Kyun Behka Re” with Lata was also a hit and several blockbusters by L-P had Asha as lead voice in films such as Suhaag, Vakil Babu, Dostana, Adha Din Adhi Raat, Loha and Anhonee etc. to name a few. L-P scored for a Nagarjuna (actor) “Telugu” Film Majnu (1987 film) which remained a musical hit.

Laxmikant–Pyarelal composed Indian classical music as well as Western music; they were most popular for their folk tunes and semi-classical music. For Shagird, they composed Rock-n-Roll-style melodies, and in Karz the music is closer to disco. For this film they wrote a Westernised version of a Ghazal, “Dard-e-dil Dard-e- jigar”, and they received the Filmfare Best Music Director Award for the year.

In the third quarter of 1963, L-P’s first ever song “Hansta Hua Nurani Chehra” from Parasmani hit the “Binaca Geet Mala”. After that, L-P’s songs were regularly and prominently aired on “Binaca Geet Mala”. There used to be sixteen songs in each of the weekly “Binaca Geet Mala” programme, more than half the numbers of the songs were of L-P. There are certain weekly Binaca Geet Mala programmes in which more than 13 out of 16 songs of LP were broadcast when LP were right on top of their career. BGM used to broadcast annual (Vaarshik) programme giving the orders of the top 32 songs of every year. In this programme also, L-P had the upper hand. Not only that, on average, there used to be at least 15 songs from L-P, also about 50% of the songs between top to tenth position. Laxmikant–Pyarelal have 245 numbers of Binca Geetmala Final Songs…(The songs compiled at the end of every year, to measure the popularity)..The highest numbers of the songs by any music directors appeared in Binaca Geetmala Finals. Apart from Laxmikant–Pyarelal have the highest numbers of the TOP songs for 11 years. The Binaca Geet Mala records show that Laxmikant–Pyarelal have completely dominated this musical programme.

Tusshar Kapoor, a single father, claims that having a “different family” does not imply having a “dysfunctional family.” 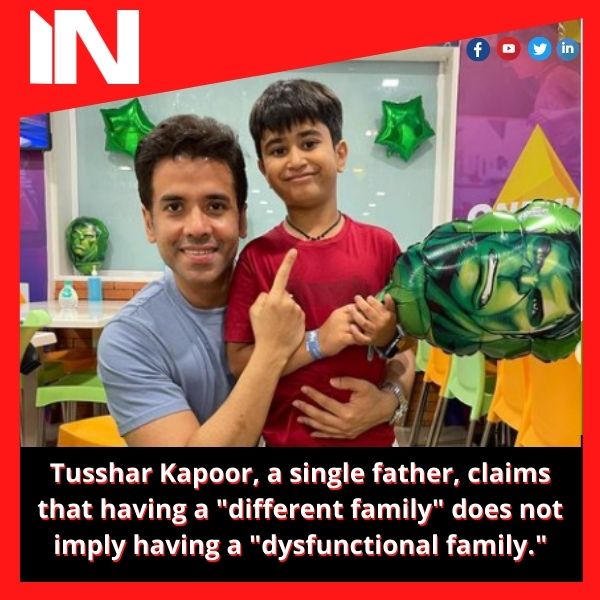 The actor chose to be a single parent and continues to raise his son on his own. Tusshar spoke about the challenges of being a single father in an interview with BBC India.

He made his debut in 2001 with Mujhe Kucch Kehna Hai opposite Kareena Kapoor. Tusshar has acted in many successful films including Khakee, Kya Kool Hain Hum and Golmaal.

Bollywood actor Tusshar: “I will tell him that all families are different from each other”.  Tusshar Ali Khan’s unconventional family life will be questioned as he is single and not married. A ‘different’ family is not necessarily a ‘dysfunctional’ family, says Tusshar.

He co-produced the film Laxmii under his banner Tushar Entertainment. Last year, he made his debut as an author with the book Bachelor Dad.