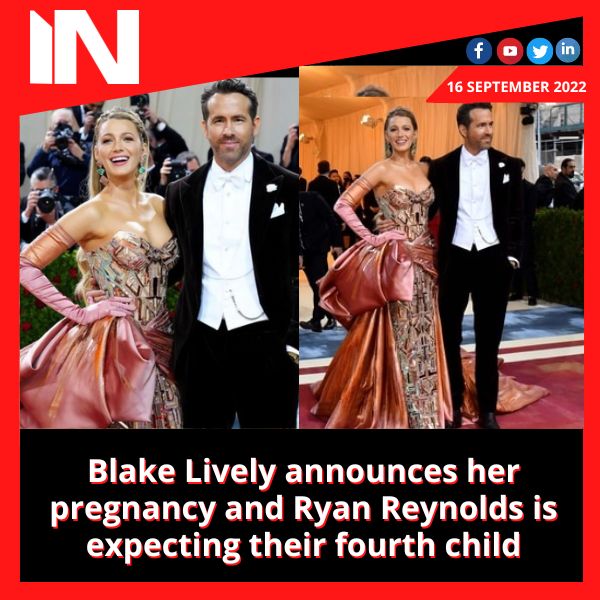 The family of Ryan Reynolds and Blake Lively is about to grow. The actor-couple, who already have three kids, will soon welcome their fourth child into the world. On Thursday night, Blake attended at a red carpet event in New York while sporting a baby bump.

Blake made her pregnancy bump public on September 15 while attending the Forbes Power Women’s Summit. Fan clubs have posted photos of the actor on social media showing off her baby bulge while wearing a golden sequin dress.

The actor joked, “I just like to create,” during the occasion, according to E! News. I really really enjoy creating, whether it be with food or with stories or with people or with enterprises.

In 2012, Ryan and Blake got married. The couple often keeps their girls out of the spotlight, but that hasn’t prevented them from waxing poetic about their life as a unit and raising their daughters.

Blake had previously stated to Forbes in May, “Having children for me helped me feel so much more in my skin.” I’ve never felt more secure, comfortable in my own skin, or like myself. This is not to say that I don’t have plenty of insecurities, but I just feel wonderfully at peace.

With The Sisterhood of the Traveling Pants, Blake’s career took off when she was a teenager in 2005. She later garnered more notoriety for her part in the popular series Gossip Girl. She has also been seen in many movies, initially teaming up with her future husband Ryan Reynolds in the superhero movie Green Lantern from 2011. In the movie The Rhythm Section from 2020, she was last spotted.

According to Jimmy Kimmel, Andrew Garfield became a real-life Spider-Man to save him