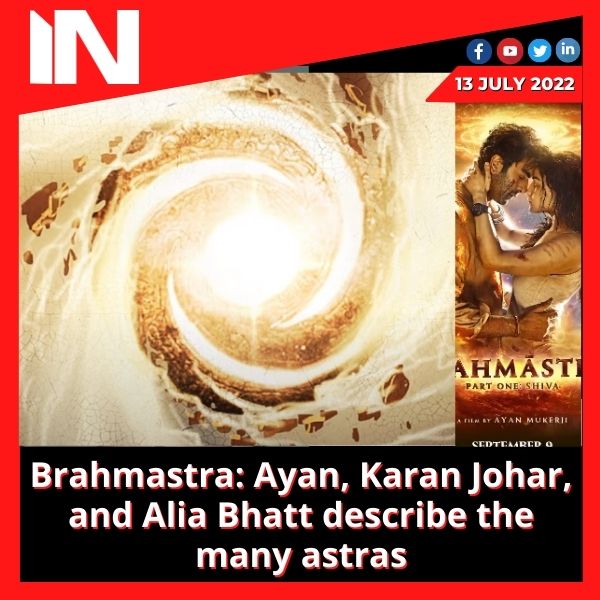 On Wednesday, Alia Bhatt, Karan Johar, and Ayan Mukerji posted some brand-new images of the various astras (weapons) featured in their upcoming movie Brahmastra Part 1: Shiva on Instagram. Ayan can be seen introducing and breaking down the many astras that are part of the next movie, which hits theatres on September 9, in the nearly four-minute-long trailer with spectacular VFX images. Ranbir Kapoor and Alia are the leads of his magnum work. Amitabh Bachchan, Nagarjuna, and Mouni Roy are also present in the movie.

“Although Brahmastra is a fictional work, I tried to express Indian spirituality in my own unique way by making this movie. On this very important day of Guru Purnima, I wanted to go a bit more in-depth into the idea of Brahmastra, a film that I personally discovered turning me into a lifelong student of the vast wisdom contained in our ancient Indian origins. As he posted the ‘vision of Brahmastra’ on Instagram, Ayan added, “Hope you guys appreciate our creativity.

Key concept arts from the ancient Indian astras, including Vanarastra, Nandiastra, Prabhastra, Jalastra, Pawanastra, and Brahmastra, are shown in the video’s opening credits. Ayan states in the video that “Brahmastra Part 1: Shiva is the first movie of this Astraverse” when discussing the “idea of the Astraverse” (a universe of astras). It opens with a vision of a group of sages engaged in intense meditation in the Himalayas during a mystical era in ancient India. The sages are granted “The Light of the Universe” for their meditation. It is referred to as “the most potent and pure force there is” by Ayan Mukerji.

He continued by describing how astras, which include all the various forces present in nature like “fire, wind, water, and earth,” were created from this “Braham-shakti.” He referred to them as the “Jal (water), Pawan (wind), and the Agny (fire) Astra.” He also discussed astras like the Vanarastra, “which can give to the person, who controls it, the ability of a Super Monkey,” that contain the abilities of various animals. The Nandiastra, according to him, “has the strength and might of a thousand bulls within it.” One astra, however, emerged last from “The Light of the Universe,” “bearing its collective,” and was given the title “Lord of All the Others” by the sages.

The Brahmansh, a hidden society that will exist among other men and use the power of these astras to achieve good for the world, are the guardians of the Brahmastra and have sworn to defend these astras. As time passes, both Brahmastra and humanity make development. The Brahmansh continues to exist in secret in our world today, passing down the astras from generation to generation, according to Ayan.

The next adventure-tale drama’s is set in modern-day India, according to the filmmaker who is also the screenwriter for it. We are in a very unique position, in my opinion, because no one has ever used old texts in this way.

Ayan added that Ranbir Kapoor’s Agni (fire) Astra character in Brahmastra is a “wonder” because he is a “astra himself.” “He is called after the God Shiva, who is the most inspirational to me personally, the most mystical, and the all-powerful.” The much awaited Brahmastra Part 1: Shiva trailer available as of June 15. The three-minute teaser demonstrated the epic scope of the movie by jam-packing a lot of aesthetically breathtaking moments.

In response to allegations that he and Rohit Shetty had a fight, Pratik Sehajpal