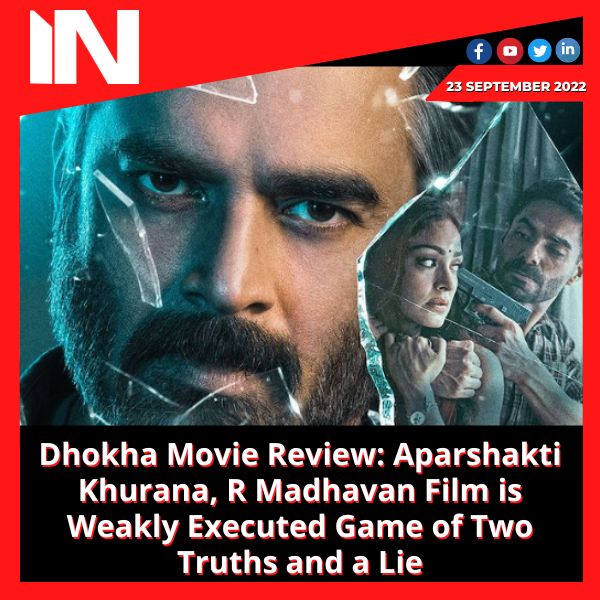 This weekend is a fairly exciting one for moviegoers. While R Balki is releasing his psychological crime thriller Chup, The Big Bull and Prince filmmaker Kookie Gulati is experimenting with the crime thriller subgenre with his most recent film, Dhokha: Round D Corner. The main cast of the movie, which also includes R. Madhavan, Aparshakti Khurana, Darshan Kumar, and Khushalii Kumar, centres on a woman who is allegedly insane and has been taken captive by a terrorist in her own home. Her husband and a group of police officers work to free her.

Sanchi, a homemaker, is played by Khushalii, and Yathaarth, her husband, is played by Madhavan, as the trailer has already shown. Terrorist Haq Gul, played by Aparshakti while Darshan Kumar, causes havoc in their life.

Inspector Malik and Gul, on the other hand, have a shared past. In an alleged bomb blast case, Malik had apprehended him and imprisoned him for several months. He apparently escapes while being transferred from one jail to another and takes Malik’s gun with him.

It seems like a game of two truths and a falsehood in the first half. Each character tells the story from their perspective. Sanchi accuses Yathaarth of fraudulently labelling her as mentally ill and engaging in an extramarital affair, while Yathaarth maintains Sanchi is delusional, believes she is wrong to suspect him of having an affair with her psychiatrist, and believes she is using her sensuality to manipulate the situation.

Haq and Malik are playing the game separately. Malik alleges that Haq is a skilled Kashmiri terrorist who organised the bombings and is in the city to get revenge for a death that occurred years ago. Haq, however, insists that he is an innocent man and denies knowing anything about it.

Director Kookie Gulati adds a layer of Lima syndrome to spice things up while he is trying to entangle you in their lies. Sanchi can occasionally take charge of the situation thanks to this syndrome. And to top it off, she seduces Haq with her sensuality to keep him enthralled.

Trying to determine who is telling the truth and whether Sanchi is safe takes up most of the second half.

The movie’s plot seems intriguing on paper, but it isn’t fully realised in the final product. Gulati tries to make the suspense more dramatic, but somewhere along the line, he throws both elements off. Although the first half of the movie takes a while to develop, you would expect it to keep you interested right away considering the genre. However, the uneven pacing and uneven concentration prevent you from engaging with the movie fully.

Only partially does the second half of the movie attempt to save it. The film’s climax is unquestionably its best moment. Gulati concentrated more on tying the knots at the end than on positioning the threads for the ties.

Aparshakti is without a doubt the movie’s leading lady in terms of acting. The actor dazzles with his good Kashmiri accent and displays practically all of his acting skills throughout the film, including those of an unstable criminal, a feeble lover, a guy forced to choose between life and death, and ultimately, a devastated mentally sick man. His film is the real deal.

He has excellent support from R Madhavan. Watching him perform roles with little romance and more pushing of limits is always enjoyable. But watching Darshan Kumar play a poorly written character was devastating. Even in this circumstance, he makes an effort to save what he can, but it is insufficient.

It is disappointing to note that the movie gave Khushali Kumar, who is making her Bollywood debut with the movie, much more screen time for her curves than for her face. Given that Sanchi was the main character of the movie, her portrayal ought to have been better. #JusticeforSanchi!

A special note should be made of the movie’s parody of the newsrooms, which served as a reprieve. Gulati occasionally seemed to be diverted from the suspense story, so he included sequences showing media organisations competing for TRP ratings over the coverage. A journalist who was modelled after some of the noisiest television anchors was also included in the movie. There were a few laughs as a result, but primarily it felt forced.