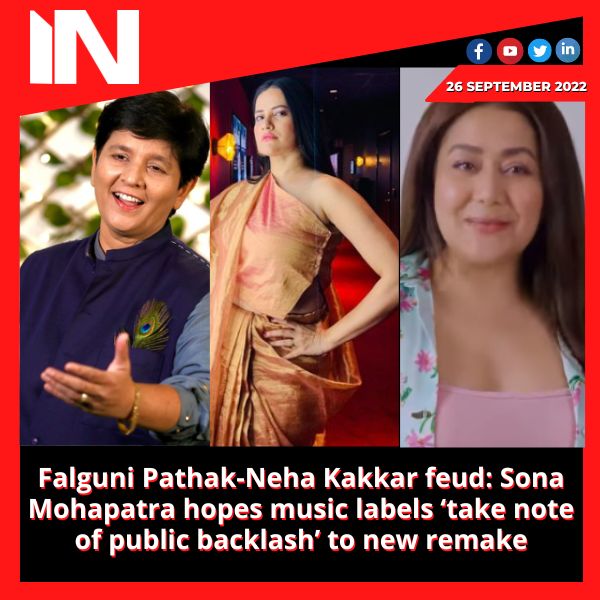 Singer Sona Mohapatra has spoken out about “music labels and Bollywood film producers hurting the creative community” in the midst of the ongoing verbal spat between singers Falguni Pathak and Neha Kakkar. Recently, Falguni’s song Maine Payal Hai Chhankai was remade by Neha Kakkar as her single O Sajna. She received criticism from Falguni and users on social media.

Sona expressed her desire on Twitter, writing, “I can only hope that the music companies and #Bollywood film producers who are murdering the creative community and creators by ordering short-cuts, remakes, and remixes will pay attention to the negative public reaction to the current #FalguniPathak hit.

After the release of O Sajna, Falguni reposted on her Instagram Stories comments from fans criticising Neha’s song. According to a tale Falguni said, a supporter urged her to bring a lawsuit against Neha. In response to the story, the singer reportedly remarked, “I wish I could, but the rights are not with me.”

In an interview with Delhi Times, Falguni had stated, “I learned about the remixed version three to four days ago. The initial response was negative. Mujhe bas ulti aani baaki thi, aisa ho gaya tha, I thought. (I felt like I was going to throw up.)

Neha posted a message on her Instagram Stories after receiving criticism, “If speaking negatively about me, calling me names, or abusing me in this way makes them feel good and if they believe it will spoil my day. I’m sad to have to tell them that I’m too fortunate to experience unpleasant days. This God’s child is constantly joyful because God keeps me joyful. For those who find it so upsetting to see me successful and happy. I’m sorry about them. Bechare (poor things). Please continue leaving comments; I won’t even delete them because I and everyone else are aware of what NEHA KAKKAR is.”

The singing reality series Indian Idol season 13 promo video was revealed by Sony TV during their altercation. Neha greeted “famous Falguni ma’am” on the show in the video. During the garba night on the programme, Falguni nodded while grinning and sharing the stage with Neha.

Actors Vivan Bhatena and Nikhila Palat were featured in the original song, which was published in 1999. In a college festival, the song was performed as a puppet show. The song was a huge success. Priyank Sharma and Dhanashree Verma are included in the revised version. O Sajna was written by Tanishk Bagchi, who is renowned for reinterpreting classic Hindi songs.

When Dev Anand talked about losing his first love Suraiya ‘Had I gone to her, my life would have been different’