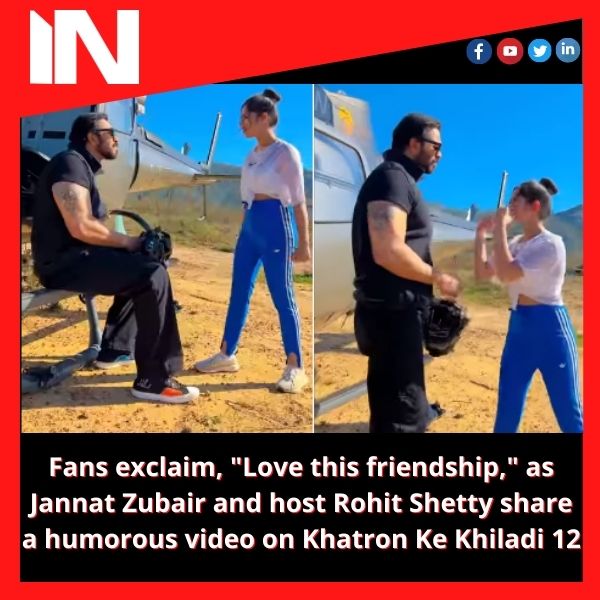 Actress Jannat Zubair is one of the most well-known people on social media and has a lot of talent. She has a long history in the television industry. The actress has had a good career, working as a kid artist and now starring in a daily soap. She currently appears in Season 12 of the reality series Khatron Ke Khiladi, which features stunts. It should be noted that the reality show’s 12th season is now being filmed in Cape Town, and just like every other season, viewers can expect to see an intriguing mix of famous people competing for the title. On social media, Jannat Zubair has been updating her followers on her “Khatron Ke Khiladi 12” adventure with amusing BTS videos.

In relation to that, the celebrity recently shared a video on Instagram alongside host Rohit Shetty. As soon as Jannat shared the humorous video, it quickly went viral, and her followers flocked to leave lovely remarks. Love this bond, one individual commented. A different user said, “Wow.” Additionally, they added heart-shaped emoticons to the comment box.

In a recent interview with ETimes, Jannat discussed her experience so far on the show and her coach Rohit Shetty. She discussed being the youngest participant on the show and the unique name that host Rohit Shetty gave her. She remarked of the host Rohit Shetty, “More than anything, my goal is to learn as much as I can from all of my fellow competitors as well as from our mentor Rohit Sir. I enjoy all the attention I receive on set, but when it comes to stunts, I’m given equally difficult assignments, so I always try to do my best to achieve them. Rohit gave me the nickname “Chhota package, bada dhamaka” as a result.

Advertisement
Related Topics:exclaimfansfriendshiphosthumorousjannatzubairkhatronkekhiladiloverohitshettyshareVideo
Up Next

Hina Khan and Rohan Mehra, who co-starred in Yeh Rishta Kya Kehlata Hai, are back together