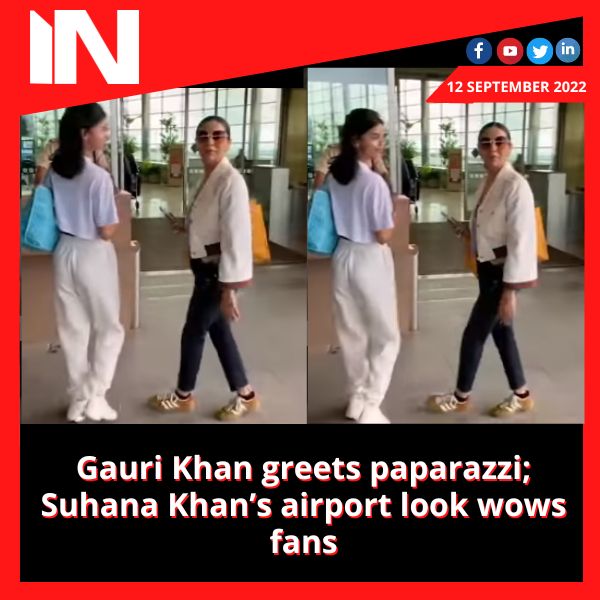 On Sunday, Suhana Khan and Gauri Khan were seen travelling together and landing at the Mumbai airport. The mother-daughter duo was photographed by paparazzi as they exited their vehicle and entered the airport. Suhana could be seen grinning at the photographers as she made her way to the airport gate while Gauri greeted them.

Gauri and Suhana had recently been seen entering and exiting Mumbai. Their most recent airport appearance was captured on camera, and paparazzi and fan pages on social media posted pictures and videos of it. Suhana Khan appeared to be wearing a white crop top and matching cream slacks, while Gauri stood out in a white blazer, matching sneakers, and denims. The response to Suhana’s airport look and praised her for keeping it ‘casual’.

“So pretty Suhana,” one fan wrote on an Instagram video provided by a paparazzo account. “She looks simple and beautiful,” another person added. “Your outfit is fire,” and another admirer commended Suhana and Gauri, calling them “the most exquisite and stunning mommy-daughter pair.” Many additional people commented with the fire and heart emojis.

Suhana will soon make her acting debut. She is the daughter of superstar Shah Rukh Khan and interior designer Gauri Khan. She will appear in the eagerly anticipated Netflix movie The Archies, which will also feature the acting debuts of Khushi Kapoor, the younger daughter of the late Sridevi, and Amitabh Bachchan’s grandson Agastya Nanda. Director Zoya Akhtar had previously declared the conclusion of the Ooty schedule of her upcoming film.

Gauri, meanwhile, recently appeared in a cameo on the Netflix series Fabulous Lives of Bollywood Wives. The programme focuses on the relationships between Neelam Kothari Soni, Maheep Kapoor, Seema Khan, and Bhavana Pandey as well as their individual weddings as it follows their lives.

Harnaaz Sandhu starts her day with ‘the iconic Serena Williams’