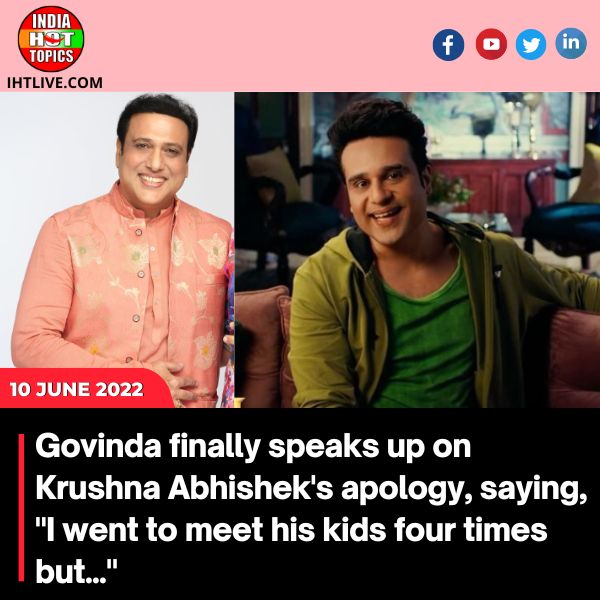 NEW DELHI: For years, actor Govinda and his wife Sunita Ahuja have been open about their difficult relationship with actor-comedian Krushna Abhishek. It all began in 2016, when multiple reports suggested that their relationship had become strained. Sunita was later angered by Krushna’s wife Kashmera Shah’s tweet in 2018 about “those who dance for money.” Sunita saw the message as a dig at Govinda. Following this episode, Krushna and Govinda have frequently discussed their difficult relationship on social media.

In addition, Sunita and Kashmera Shah have made digs at each other in a number of interviews and media appearances.

Govinda recently featured on Maniesh Paul’s podcast, where he discussed his bond with his nephew Krushna once more. “He has inferred and presumed that anything unpleasant is happening in his life due to me,” Govinda told Indian Express.

When Maniesh told him that Krushna was genuinely sorry when he mentioned Govinda, he responded, “Then let the love shine through even when you’re not on television. He’s clearly a well-adjusted young man. However, he must understand that he is being exploited by writers and that there is a limit to how much he can be utilised.”

Govinda expressed his amazement at Krushna’s public requests for forgiveness without personally reaching out to him. The star of ‘Hero No 1’ addressed Krushna directly, calling him a “nice youngster.” “Keep working hard, there’s no problem,” he added. “Relax, and may God bless you.”

Govinda went on to say that “Krushna claimed in interviews that he never saw his newborn children in the hospital, despite the fact that he went four times and was informed he couldn’t meet them. He assumed it was nothing more than a preventive step.”

Krushna spoke on Maniesh’s show almost a month ago, and Govinda responded almost a month later. During the conversation, Krushna was asked about his uncle Govinda’s feud with him, as well as the reasons for it. He responded, “When I speak to the media, it gets ripped and pasted and posted on their social media. Chi chi mama, I’m missing you and I adore you. Please don’t believe everything you read in the papers or hear on social media. What I miss the most is having my children play with my mother. I’m sure he misses me as well. That is something I am aware of.”

It’s worth noting that Krushna, who appears on ‘The Kapil Sharma Show,’ has repeatedly joked about his feud with Govinda on the show.

Advertisement
Related Topics:AbhishekFeaturedFinallyfourgovindakidsmeetSpeakstimes
Up Next

Shocking Twist, Anupamaa! Barkha intends to use the Shah family to sever Anuj and Anupama’s relationship