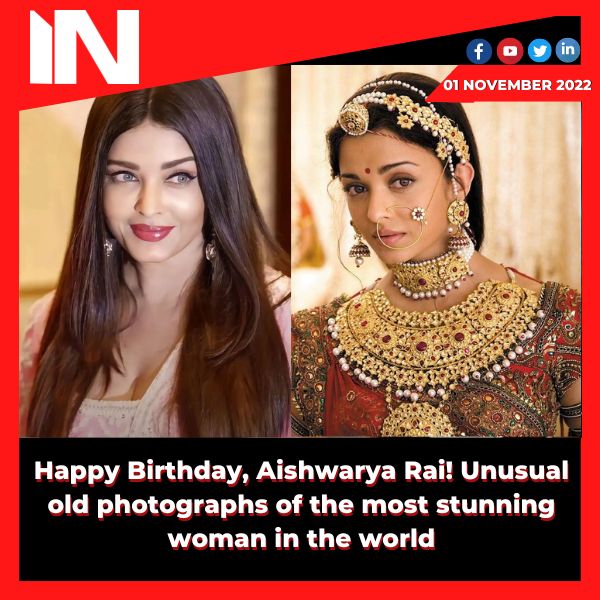 Let’s look back at some of Aishwarya Rai Bachchan’s rare old images from her early career in show business in honour of her 49th birthday.
Actress Aishwarya Rai was quite well-known even before she started acting in movies. She made her acting debut in 1997 after dominating the world of beauty pageants, and she is still one of India’s most popular celebrities today. Here are some unique old photos of her from her early years as she turns 49 on Tuesday.
Aishwarya Rai began modelling while still a college student. Before entering beauty pageants, she made appearances in a number of advertisements and TV ads. Sushmita Sen was her opponent when she entered the Femina Miss India pageant in 1994; Sushmita won the title, and Aishwarya finished as the first runner-up.

She went on to represent India in Miss World in 1994, when she won the gilded crown depicted in this vintage photo.
Aishwarya Rai began receiving movie offers after winning the 1994 Miss World competition. She made her acting debut in Mani Ratnam’s 1997 Tamil film Iruvar. The same year saw the release of Aur Pyaar Ho Gaya, her debut Bollywood movie in which she also starred. Another old photo of Aishwarya and Koi…Mil Gaya actor Rajat Bedi is shown here.

In this flashback image from her early modelling days, the diva looks magnificent. She once recalled her difficult times, including how she commuted to college in Mumbai using trains and buses. I travelled by bus, train, and everything else when I was a college student.

She said to Rajeev Masand, “I know exactly how it gets at Dadar station, I know how it is in buses, and I know how the wet season is just not at all the easiest on public transport.

Another illustration of Aishwarya’s devotion to traditional clothing may be found here. Check out this never-before-seen photo of her from a promotional event where she wore a straightforward grey sari and still managed to look stunning despite wearing little makeup.

After winning the 1994 Miss World pageant, Aishwarya adopted the moniker “blue-eyed girl” as her own. In this ancient picture, her eyes say a lot. She once remarked to Wild Films India how people were drawn to her because of the colour of her hair and eyes. When I was younger, my blue eyes and hair colour attracted people’s attention, the woman said. People used to think I was cute, but winning Miss World made me feel like I was floating through the air.

Aishwarya recently made her film debut again. In his masterpiece Ponniyin Selvan I, she collaborated once again with Mani Ratnam. She has two roles to play in the movie. The movie rose to the third-highest earning Indian picture of the year.

The “Jet Lagged” Star of Priyanka Chopra Gets Mobbed at the Mumbai Airport and Binges on Cheetos and Koffee With Karan.

Speaking of “raunchy item numbers,” Kangana Ranaut shares a clip from Madhubala’s Aaiye Meharban. Everything is in this song.